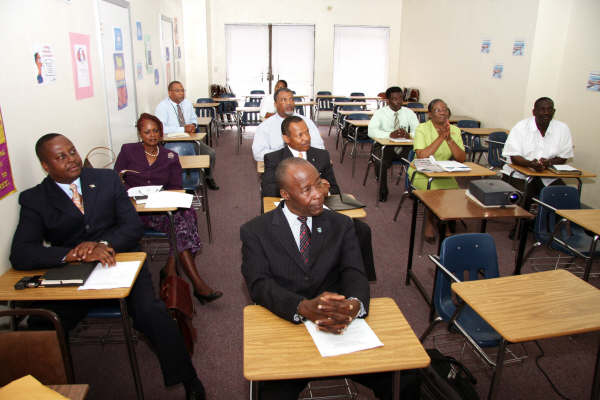 <<<Seven newly appointed Family Island administrators are pictured along with representatives of the Ministry of Public Works and Transport during a two day workshop held at the Public Service Training Centre.

Permanent Secretary in the Ministry of Public Works and Transport Collin Higgs urged Family Island administrators to ensure that the communities for which they are responsible function well.

Mr. Higgs addressed seven newly appointed Family Island administrators during the launch of a two-day workshop at the Public Service Training Centre last week. The workshop was held to inform the administrators of the procedures and operations of the Ministry.

“The administrator in the Family Islands fills a very important role because he represents every aspect of the public service and government agencies…he is responsible for infrastructure works and capital works. He is also responsible for transportation and road traffic matters,” said Mr. Higgs.

Mail boat services, building controls, sub-divisions and physical planning are among the topics to be discussed during the training.

“People in the communities in those islands really depend on the mail boat service. If it is interrupted for any reason whatsoever then they begin to experience hardship very quickly. You have a role to play in ensuring that the operation is efficient and effective,” he explained.