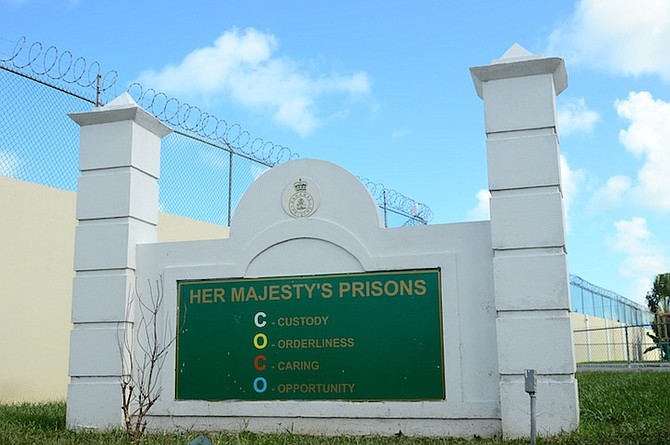 Gibson had created serious problems inside the walls of Maximum Security!

Nassau, Bahamas — Breaking News coming into Bahamas Press confirms a prisoner at the Bahamas Corrections Services was found dead in his cell.

BP was live at the scene, which unfolded in the Western Block Section of the Maximum Security around 5 am this morning, when authorities discovered 26-year-old Jamal “Eggy” Gibson formerly of Step Street, Fox Hill hanging from a white cord in his cell.

Gibson, you would remember, was arrested following the September 29th, 2014 killing of 36-year-old Ricardo Moss and the attempted murder of Carlos Lamm and Damian Gibbs. Moss was killed while sitting with Lamm, Asherton Barton and Damien Gibbs at Grace Terrace off Bernard Road when Gibson reportedly opened fire on them.

When Gibson released a hail of bullets, which almost turned out to be the second Fox Hill massacre, Moss was reportedly shot in the head, Lamm was shot to the stomach, Barton in her thigh and Gibbs in his leg.

But if you think that was all of Gibson’s violent behaviour, then think again. In less than a month following that incident, on October 29, 2014, police further suspected Gibson in the murder of John Alton Davis. Thirty-eight-year-old Davis of Kelly Lane, Fox Hill, was riding along Adderley Street around 9 pm that night, minding his own business, when two men emerged from bushes on the eastern side of the street and shot him fatally.

Davis was the 98th murder for that year.

Gibson sources tell us had created problems inside the walls of the prisons all week, and boy, it didn’t end well for him.

As one experienced law enforcement officer so aptly told BP, “The government has failed to see to it that Capital Punishment is indeed enforced. The Privy Council sitting London has circumvented the law, making it near impossible for Capital Punishment to be administered and indeed carried out in the Bahamas. And, therefore, the criminal elements are now doing what the authority should be doing! People are getting murdered in jail now – What in da hell is dis, BP?”