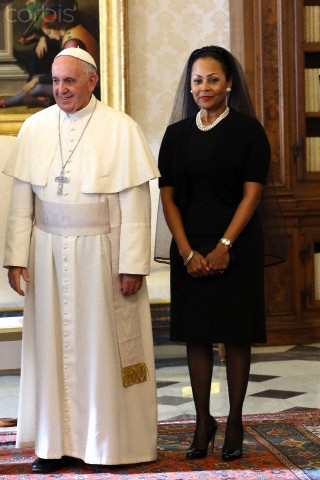 Havana – The Council of State of the Republic of Cuba, on the occasion of the visit of His Holiness Pope Francis, has agreed to the release of 3522 prisoners.

The Embassy of the Commonwealth of The Bahamas received the good news on Friday afternoon 11th September, 2015 when Ambassador Adams was officially notified by Ms. Anet Pino, Deputy Director of International Law and Multilateral Division of the Ministry of Foreign Affairs, Cuba that nine (9) Bahamian inmates were also pardoned.

Among the 3522 pardoned, included inmates over 60 years of age, younger than 20 years with no criminal record, chronically ill, women, those set for conditional release in 2016, and some serving and working in open conditions, as well as foreigners, provided that the country of origin guaranteed repatriation.

With few exceptions for humanitarian reasons, this did not include persons sanctioned for the crimes of: Murder, Homicide, Rape, Pederasty with Violence, Corruption of Minors, Theft and Illegal Slaughter of Cattle, Drug Trafficking, Robbery with Violence and Intimidation against persons in their aggravated forms, nor those crimes committed against the security of the State.

On Wednesday, Ambassador Adams including Consul Saunders and Attaché Carey bade farewell to the nine (9) happy inmates as they boarded the flight carrier, Bahamasair at 1:15 p.m. destined for Nassau, Bahamas.

The functionaries at the Ministries of Foreign Affairs in both Cuba and The Bahamas as well as the Ministry of National Security in The Bahamas and the Embassy Staff networked to guarantee swift action in returning those nine (9) Bahamian men, who are now free from all of their sentences in the Republic of Cuba.

The Bahamas government thanks the government of Cuba for this gesture of goodwill that stands as a symbol of our good and cordial relations and our Ambassador to the Vatican, HE Sean McWeeny has conveyed the country’s appreciation to his Holiness the Pope.