BP REPUBLISH THIS PIECE AS A REMINDER TO THE NEW GOVERNMENT! CLEAN UP THE MESS IN ROAD TRAFFIC!!!!!

Nassau, Bahamas — Major fraud and pure ‘thiefin’ is being committed at the Road Traffic Department causing focus to be now as to exactly how some 77% of the money collected in the Driver’s License Department was transacted by inactive user IDs in the department’s system.

Thousands of dollars in public money has vanished in thin air, gone missing from the Cookie Jar, as the sitting MP for Garden Hills Brensil Rolle is named in the investigation.

It doesn’t get better than this.

Sources in the Office of the Prime Minister have informed BP that the revelations are criminal and confirm that something stinks at the very top of the department.

Here are the facts:

1)    Investigations revealed by officials that there are only four main users assigned to issue driver’s licenses at the department. However, some 48 inactive access codes have been breached to issue licenses which makes tracking the funds difficult.

2)    Further investigations uncovered the four main legitimate users in the system only account for 22% of the revenue collected by the government and the remaining 77% of the money collected was transacted by inactive/Unauthorized access codes.

3)    Investigators also uncovered that some 15 of the access codes used to collect government money are UNKNOWN to officials, which means NO ONE IN THE ENTIRE GOVERNMENT OF THE BAHAMAS KNOWS WHO THE HELL THEY ARE!!!

5)    Current Member of Parliament, Brensil Rolle’s code as former Controller of Road Traffic IS STILL ACTIVE! His code to get into the system to collect money for driver’s licenses was used as recently as November 2011!

6)    Brensil Rolle, the sitting FNM MP for Garden Hill, left as Contoller of Road Traffic more than five years ago. YET his ID into the system is still being used/accessed to sell licenses. IT’S INCREDIBLE! UNTHINKABLE! UNBELIVEABLE!

7)     The IDs of a number of persons who left the department more than 10 years ago are still being used to process driver’s licenses by the department.

8)    Additionally, a cashier currently under investigation in the Inspection Centre Fiasco of April 2011 was recently rewarded with the main user ID access into the system to print and sell driver’s licenses. Investigators have uncovered that this same cashier has for a second time breached the system – using a different ID – to sell licenses to the public.

9)    Temporary workers were also assigned access codes and, when they left the department, their codes were mysteriously still being used by officers in the department which opened the door for skulduggery!

10) And when the revelations were reported to the Controller of Road Traffic – guess what happened? The person discovering the corruption in the department was unceremoniously removed and transferred to another area.

And here’s where our story at Bahamas Press gets interesting.

Philip Turner is that public officer who made the decision to remove the IT Department Head uncovering the Crimes in Road Traffic.

He is the one who we now point to as the person attempting to conceal the revelations from the public. And here’s where BP expose gets deep!

Some reader will not remember how Turner is the same individual who left Her Majesty’s Prison Service [FOX HILL PRISON] with a Bad RECORD!

He was transferred to Road Traffic in an attempt to save his public service career.

Like a cancer eating away at the public purse there is evidence – RAW EVIDENCE – that some who sit on the public purse allowed the crookedness at Road Traffic to continue and we at BP will go further.

The investigation concluded the following: “These weaknesses have resulted in cash receipting being less than D/L [Driver’s Licenses] Photos dollar values.”

Further documents, which went as high as the office of the Prime Minister, revealed further details of the fiasco. Those documents were shown to BP and boy they tell a shocking story.

Someone hands are deep, DEEP into the COOKIE JAR!

Hubert Ingraham, we know, facilitated Turner’s stay in the service. And now that these new developments have surfaced, what has the PM done? Absolutely nothing! 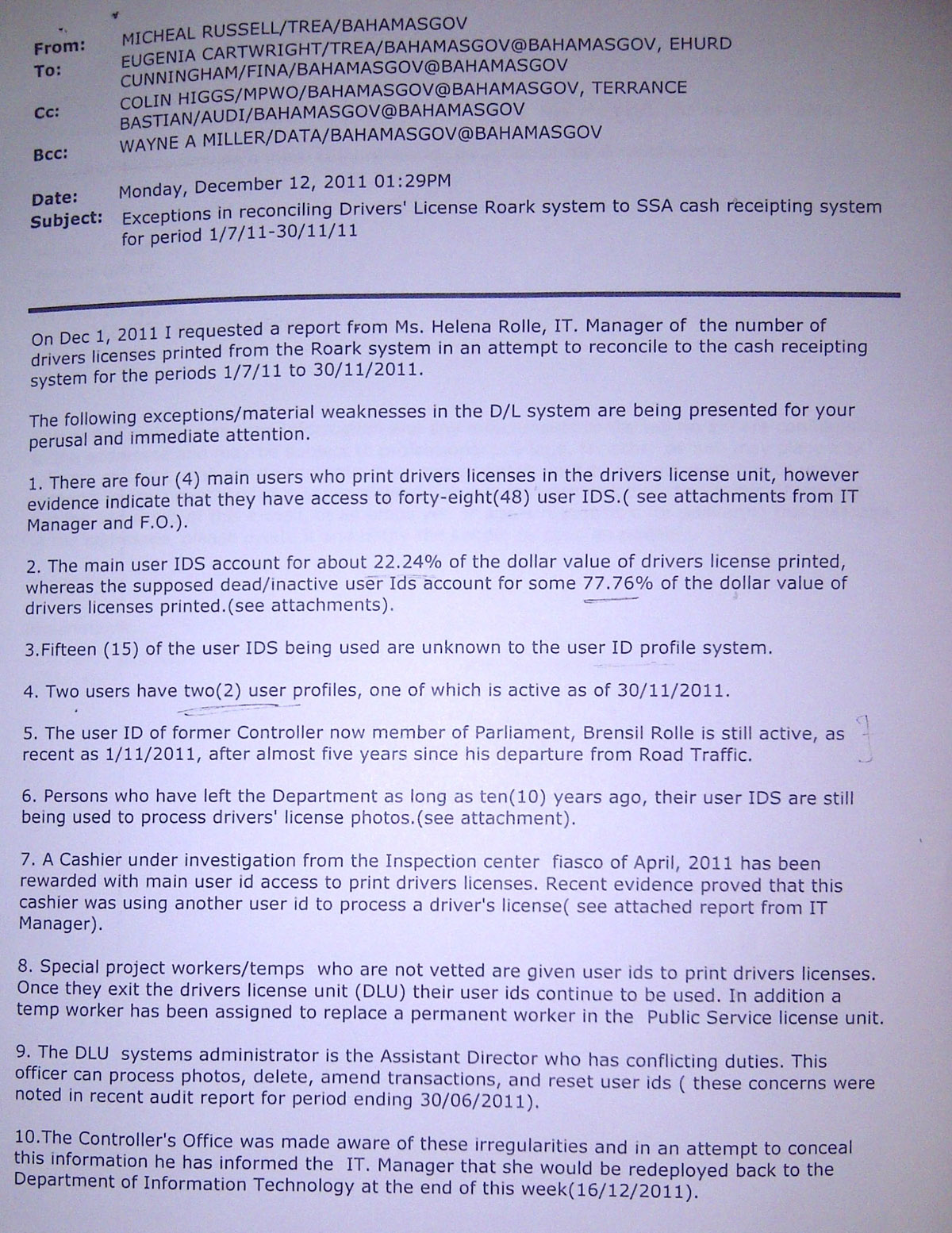