Christie, Davis and Roberts must remember the DELEGATES SENT THEM ONLY AS THEIR VOICES!!!! AND ANY DAY THEY CAN BE REMOVED BY THOSE SAME DELEGATES! 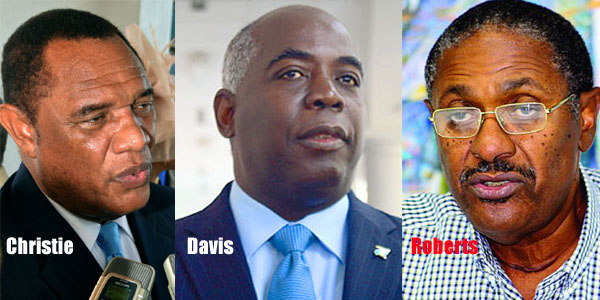 Guess who told Christie to stay on? Keep reading to find out….

Nassau, Bahamas — A story today is being written inside the PLP and what it tells will be one that will echo a long time into the future of the oldest political party in the Bahamas. From a glimpse inside we see a “one man campaign” now being played by Party Leader Mr. Perry Christie!

Serious headwinds are hitting the organization; from one conversation it is best described as “Civil War”! The hyenas have eaten the young, and the dogs of war are now about to set the stage come this November! It is bad! The exchanges are already bad. And from our archer’s view, blood is already in the water.

Sources tell us Christie has descended into rank victimizing strategies. Yesterday we saw signs of worse to come. There was no Cabinet Meetings held, as the Prime Minister was not in the country. This was a first. He is now unable to trust any member to run the EXECUTIVE! Look what we have come to!

Like Hubert Ingraham who fired key Cabinet MPs in his last and final days in office, Christie has gone to the papers, NB12 of all places which have a distaste for the PLP, threatening and doubling down in talk on who he will behead if any man moves against him. What a JOKE!

What is worse is the fact that the bad advisors now responsible Christie’s descent into all this mess have already launched a ‘vicked’ spate of attacks on persons making known their positions. It’s UNBELIEVABLE!

And all this is interesting because the man who led the PLP into two election victories is now finding out that the ROOM has gone quiet and almost everyone is concerned about the future of the party.

Christie has led the PLP into a real internal Civil War!

He has taken it upon himself to suggest only he knows when he should go, but the truth of the matter is that that is not the way it works! The Constitution inside the PLP makes it exceptionally clear that the DELEGATES make up that decision and the power of who represents the VOICE of the PARTY OF INDEPENDENCE is vested in those with the power of the ballot inside the organization at Convention! To dismiss that fact would be painfully lethal to anyone who suggests otherwise. In short as one stalwart said to me, “….dis mama dem Party – dey in-charge!”

What concerns this writer most is this: Since when were leaders in the PLP given the authority to decide who can offer themselves for high office in the organization? Anyone can challenge any post made vacant in the PLP! And while there is no guarantee the delegates would elect any ‘Johnny-come-lately’, the organization was founded on the principals of democracy! This is DEMOCRACY at its finest!

The PLP fought hard for women to exercise their rights at the voting booth! It fought hard for Universal Suffrage! It fought even harder to deliver Bahamians into the realms of nationhood through Independence! Yet today, in the Party of Pindling, Butler and Hanna, the practices of democracy are being endangered!? Ambushed with threats by the leader suggesting that whoever offers for election in the party should expect that there will be consequences?! My Goodness – What in da hell is this?!

Has the PLP become a dictatorship?!

This cannot be real! The power to elect voices of the PLP rests with the DELEGATES! They decide the future of the organization and when anyone dismisses that fact then ya know…IT’S TIME FOR THEM TO GO HOME!