Why is Greg Gomez so “DISHONEST” and loves to LIE? Here is the letter where Gomez resigned from the 52-week program after being selected to run, but he told the persons he was victimized and fired by the PLP! Which is it? 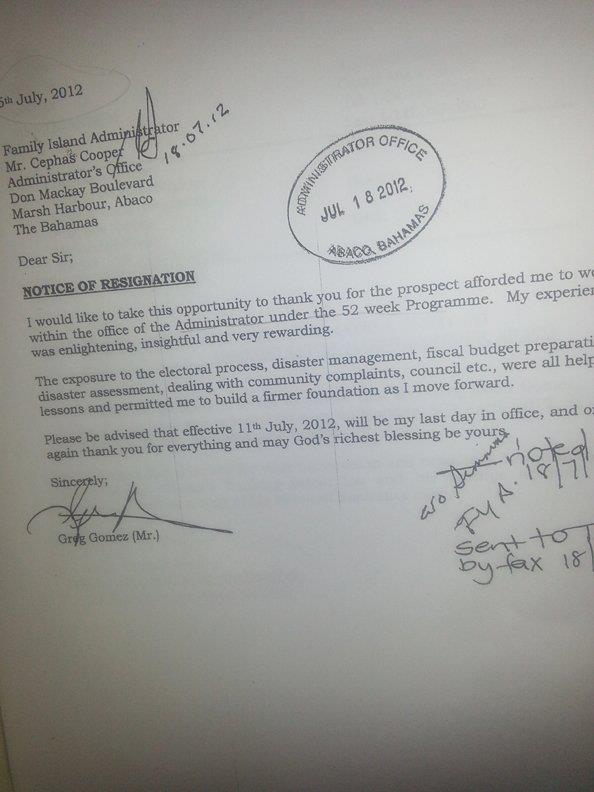 Nassau, Bahamas — Bahamians must seriously examine the kinds of characters they send to Parliament and the FNM candidate for the North Abaco seat is a classic.

Before we get into the meat of our story today however, we are once again asking the FNM, and Greg Gomez to tell us why was he ORDERED OUT OF THE UNITED STATES OF AMERICA? Come clean even if you must come ROUGH DRY!!!

We at BP have a serious problem with FNM’s latest version of Mr. Bamboozle. First he tells people he is an “Educator” but then could not name the school where he taught. He then says he taught in the Bahamas, but could not say at which school and had to withdraw that lie after hanging up on a reporter.

He told another lie when he said he was appointed Family Island Administrator for Marsh Harbour community, but we all know that that, too, was a lie, because today there is evidence where it confirms in this letter [above] that he was not appointed Administrator but was on the 52-week program.

Gomez told the press he was placed on the 52-week program by the PLP and not the FNM. But that, too, is another damn lie. And the letter above explains it, but NIB also shows records for him paying contributions for May, which means he was on the program before the elections.

In fact, government records prove, as published on BP on Sunday, that Gomez was placed on the program designed for young people under 30 years of age starting last year. The list posted on BP showed Gomez assigned to FES Construction, a job he never showed up for and was paid off the books for, so no contributions were made for him to NIB!

Minister for Local Government Alfred Gray pointed out that if the FNM government had promised Gomez they would put him on a 52-week program, then they must explain to him why they fooled him into believing that he might have been appointed as a Family Island administrator during that 52-week program.

“It can’t be both,” Gray insisted.

The minister added that perhaps Gomez was promised that if the FNM had won he would have been appointed as a Family Island administrator in training.

“But I want Mr. Gomez to know that lies will not assist. He should speak the truth because the records will be made public if that is what we need to do,” Gray said.

So here we go again. Gomez lies yet again and the FNM campaign in North Abaco is imploding with a free fall!

Gomez now tells the press – after claiming to be an “Educator” – that he makes his money from the collection plates of Abaco. Why would a preacher lie so? This is not good!