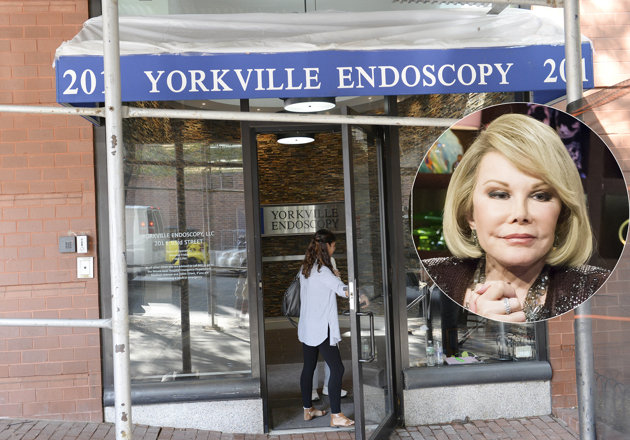 Something went wrong on Joan’s

Dr. Lawrence Cohen, the medical director at Yorkville Endoscopy, where Joan Rivers was having her procedure and went into cardiac arrest, was asked by the board to step down from his post and accepted, ABC News and TMZ reported on Friday.

New details about an unauthorized doctor being present for the actress’s medical procedure emerged late Thursday that led to Dr. Cohen’s dismissal.

The New York Times reported that an ear, nose, and throat specialist was in the operating room at Yorkville Endoscopy in Manhattan on Aug. 28 when the comedian had her upper endoscopy despite the physician not being allowed to practice medicine in the clinic.

The unidentified E.N.T. specialist was brought in by Rivers’s gastroenterologist, Dr. Cohen, and was identified as an observer, not a doctor, so clinic personnel assumed it was Rivers’s makeup artist. However, the specialist examined Rivers’s voice box before and after the gastroenterologist performed the routine procedure, during which a tiny camera was used to look down the throat into her digestive system as Rivers had been complaining of hoarseness and a sore throat.

[Related: Liza Minnelli: I Missed Joan Rivers’s Funeral Because I Have a Broken Back]

The problem is that specialist was not cleared to work at the clinic, which must review and approve the credentials of every physician prior to allowing them to participate in procedures.

The report also has details about what went wrong during Rivers’s procedure. Just as it was wrapping up, medical personnel realized that the Fashion Police host’s oxygen level was crashing, a source said. It’s unclear what led to that — whether it was a complication of the procedure or a result of the anesthetic she was given, which the person said was the powerful sedative Propofol.

The clinic called 911 and despite attempts to revive her at that facility, by paramedics transporting her to the hospital, and later at Mount Sinai Hospital, Rivers never regained consciousness. She died on Sept. 4 after being removed from life support.

A rep for Yorkville Endoscopy has not yet responded to Yahoo’s request for comment.