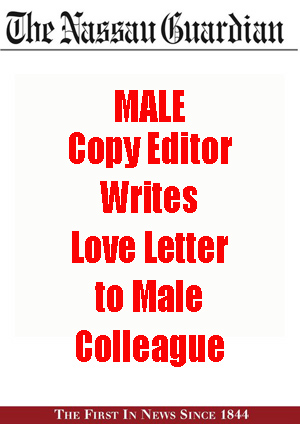 Nassau, Bahamas – Bahamas Press can confirm management of the Nassau Guardian has summarily terminated the services of its copy editor following a SEXUAL stalking episode in the newsroom.

Readers would remember BP broke the story how a staff member in the editorial room wrote a love letter, declaring his affection for a male colleague some time in late October. For months the “sexually aroused” editor had been making predator-like advances to the employee, who had violently rejected his advances. The editor’s abuse and harassments continued against the young man forcing the matter to reach a boiling point at the beginning of November.

The love letter, we are told, had sent shock waves throughout the entire Guardian newsroom and left staff slack jawed. “With all the fine women on staff here, why did this JACKASS be so bold as to literally to drop his pants in front of another man is incredible? Knowing this is unacceptable,” a staffer said.

We are told when the copy editor delivered the letter to the married man, the reciepient became violent and began ‘cussin’ to the top of his voice. The colleague then reported the matter to the Chief Editor, who took the serious situation to Human Resources department.

A similar incident occurred at the Broadcasting Corporation of the Bahamas previously. That incident was hushed and swept under the ‘dutty’ rug at the BCB. Nothing was ever done to scold the employee, who we are told has an obsession for young newsroom boys.

Sexual predators seem to have overtaken media in the Bahamas and it is no wonder, news in the country cannot come “STRAIGHT” anymore.