FNM gives update on next Chairman

Dear BP please allow me space on your Face book or online page to express myself.

I am really deeply sadden of the sudden lost of our dear chairman the late Charles Maynard who I felt was doing a excellent job of bringing the party together step by step , I am glad I voted for him!!

My reasons for writing to you is clear and simple I am a officer of the party and we are now going to find ourselves voting for a new chairman in the central council. 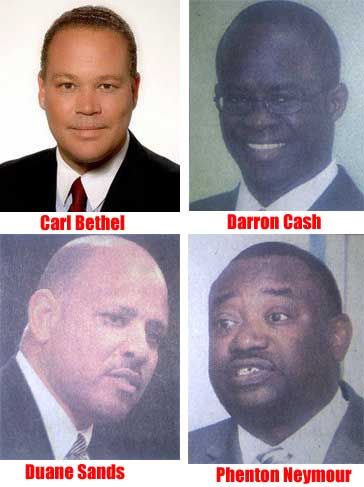 1. Duane Sands (Deputy Chairman) is well like in the party but there are question marks over him… He is a heart doctor and every time he decides to comes to council meetings Sands can’t stay long because he has a patient to deal with. I respect his profession but seriously we need a 24hr available Chairman.

2. Darron Cash (Deputy Chairman) is also well like but I am not sure he may win it because the leader is not going to support him because Cash is known to be an independent thinker in the party. Beside Cash has shown himself to be always available for council meetings and talk shows

3. Carl Bethel (recent former chairman). BP this guy does not seem to get the message; he got 109 votes while Charlie got 237. All Carl Bethel is good for is to cost confusion within the party for his own personal greed. He wanted to be the Deputy leader, before the elections he caused executives in ALL associations to turn against one another because he believed he may not get certain people support (votes) and his desire was to be deputy leader of the party and betting that if fnm wins, he becomes DPM and you wonder why Hubert gone into elections with NO deputy because of Carl evil ways! And other fnm’s wonder why we weren’t united going into this general election. He was disgruntled with the Hubert for getting kicked out of cabinet. (Damn snake)!

4. Phenton Neymour is a cool guy but I am not sure if he can fight the good fight as a chairman but if he gets it I will be willing to work with him.

5. Howard Johnson nooow this will be the best person to be chairman for he is young and the people not just in the party but the people of the Bahamas likes him. He can energize the base and continue what Charlie started God knows we need someone like him moving forward!!

P.S Carl Bethel you need to take note from Mr. Tommy Turnquest and backed down! Mr. Turnquest has proved and shown to be a true torchbearer of the party and is willing to pass on the torch to new and upcoming talents. Besides you got beat TWICE back to back, May 7th and May 19th (Convention) 2012. Hint Hint!!!!