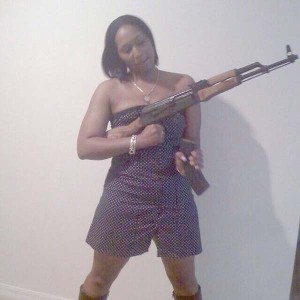 (Nassau, Bahamas) Woman arrested following social media post – In response to a recent social media posting of a woman posing with an illegal firearm, police have arrested a 20 – year old female for questioning in reference to firearm possession.

Police initiated an investigation after several photos of a woman posing with a high-powered assault firearm was publicly posted on various social media sites. The investigation led to the arrest of the suspect on Thursday 13th August 2015.

Police is issuing a stern warning to social media users who break the law that they will be tracked down and be dealt with robustly according to the law.

Police investigating two shootings – In the first incident, shortly after 9:00pm on Thursday 13th August 2015, a man was walking on Amos Ferguson Street, when he was shot in the stomach. The man was rushed to hospital, where he remains in Serious condition.

In the second incident, shortly after 10:30pm on Thursday 13th August 2015, a man was at a nightclub in Fox Hill, when he was shot in leg and lower back. The man was rushed to hospital, where he remains in serious condition.

Police wishes to reassure members of the public that they will continue with their relentless efforts to hunt down persons who continue to commit crime and will spare no efforts to bring them to justice.

POLICE ARE APPEALING TO ANYONE WITH INFORMATION REGARDING ANY CRIME, NO MATTER HOW SMALL OR INSIGNIFICANT (THE TIP) MAY SEEM, TO ANONYMOUSLY CALL POLICE AT 919 OR CRIME STOPPERS AT 328-TIPS (8477) (NEW PROVIDENCE) OR 1-242-300- 8476 (FAMILY ISLANDS)