As a political observer, the last few few weeks has been very, very interesting! Every side has their “playbook” and “go to moves” that they employ at critical times in a campaign! One such tactic was on display last week when Mr Ingraham walked through the Bain and Grants Town constituency!

The FNM supporters probably got incensed and agitated at the report of how Mr Ingraham had to adjust his route and how PLP supporters were rude towards him!

On the other hand, the PLP supporters probably said to themselves, “this man is looking to start something” by blatantly waking where he knows he isn’t wanted.  But to political observers like myself, what we find telling is the decision itself. Let me explain!

The question is why? Why did Mr Ingraham do a walk about in a PLP stronghold constituency? Ella Lewis, the woman facing the PLP’s candidate for that constituency, is no stranger to that constituency as she ran there in 2007 and got beat by Perry Christie by some 933 votes!

That was almost a 2 to 1 margin of victory for Mr Christie! In electoral terms, she didn’t get beat, she got rolled over!

The next question is, if Mr Ingraham knows that Ms Lewis, and by extension the FNM, doesn’t have a chance in heaven, hell or wherever else to unseat Mr Christie, why is he wasting precious time walking about in that constituency?

Why isn’t he walking about in constituencies that the FNM may actually have a chance to beat a PLP incumbent like Fred Mitchell in Fox Hill or Ryan Pinder in Elizabeth? Why isn’t he doing a walk about to help his protege, Mr Laing, in the Fort Charlotte constituency? Why isn’t he walking about in Bamboo Town to increase the chances of Cassius Stewart beating Branville? Why isn’t Mr Ingraham doing walk abouts in Grand Bahama to help sure up his base there? The one place he shouldn’t be wasting time doing walk abouts is the constituency held by Perry Christie, a historical PLP stronghold!

So the question is why? What is Mr Ingraham up too? Here are some numbers you need to look at: 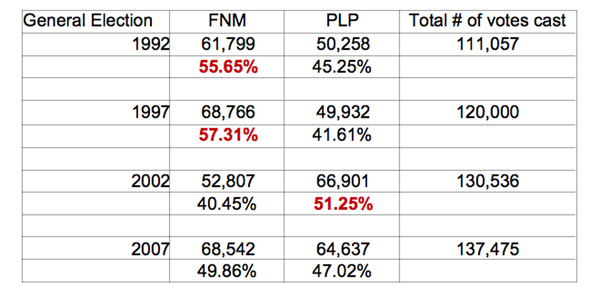 The 2007 election was the closest post independence election in the country. History was made as before 2007, every election was basically a blow out on either side!

The point I am trying to make is, elections in the Bahamas, for the most part, swings violently from one side to the next! What causes such shifts in voter appetite? Its not the youth vote as some would have you believe; nor is it independents voting in mass for one particular party! The number one culprit is disgruntled party supporters who protest vote!

Until the 1987 elections, the FNM had never gotten more than 40% of the total votes! The elections of ’87 saw the FNM crack the 40% mark for the first time as they garnered 43% of the total votes cast!. What caused this increase? The Commission of Inquiry a few years back, had badly wounded the leadership of the PLP  and the calls for Sir Lynden to step down began. The FNM thought they had a certain victory that year and that lost in ’87, to this day, is one of the most stinging defeats in all of Bahamian politics!

The FNM victories in ’92 and ’97 were in large part due to PLP’s crossing the political line to protest the leadership of the PLP. The FNM’s victory, had little to do with Ingraham. Had a door knob been the leader of the FNM in ’92 and ’97, the Bahamas would have had the first door knob prime minister, as Bahamians just wanted to get rid, not of the PLP, but it’s leadership and it took the two bad losses at the polls for the PLP to figure that out!

I believe this is one of the reasons Mr Ingraham originally agreed to stay on for two terms. He knew that as long as Pindling was the leader of the PLP, he had the anti Pindling vote of PLP’s in his pocket! When Pindling stepped down, Ingraham stepped down right after. Why? Ingraham knew the good times were over because with Pindling gone, those PLP’s who voted FNM, would go home!

So what happens when those PLP’s come home? Well, it looks something similar to the ’02 elections. A blow out and the FNM goes back to collecting their 38-40% of the total votes!

The FNM’s base of support nationally, is smaller than the PLP’s. This notion that both major parties has 40% of the vote and independents make up the other 20% is utter nonsense. The majority of Bahamians identify with the PLP and what history tells us, is that when PLP supporters aren’t happy with their party, they express their displeasure and vote for the second option! When there is no tension within the PLP’s base of support, the FNM, invariably struggles!

The same recipe played out leading up to the 2007 election. As soon as the PLP “scandals” started coming to light, coincidentally, you then started hearing rumors of Mr Ingraham wanting a comeback! Why? Again, tension within the PLP is one of the main ingredients the FNM needs in order to beat the PLP. That is the only way they can attract non FNM votes! That is why Mr Ingraham kicked Tommy to the curb; he saw he had a good shot of winning because the PLP was loosing altitude fast!

But the problem Mr Ingraham has heading into the 2012 elections is, the PLP’s base of support is unified! So where there is no tension, Mr Ingraham and his media cohorts, have been looking for a scandal or trying to nudge, entice or even provoke one heading into May 7th.

This brings me to an issue about Mr Ingraham’s leadership as FNM leader that no one really talks about. As party leader, Mr Ingraham has done a poor job in actually building his party’s base as the 1997 election seems to have been the pinnacle of FNM support! Since then, they have not even come close to getting that kind of support electorally.

If after 3 terms in office, you still have to rely on the other party to be imploding to increase your chances of winning, then that says a lot about that party’s inability to significantly expand its base of support even in good times!!

Now you know why the FNM and their media supporters, especially the Tribune, of late, has been consistently attempting to show the PLP and its supporters as corrupt, untamed, uncivilized, uncultured, uneducated, poor, lazy people. Now you understand why Mr Ingraham went on the stop, review and cancel tour when he took office in 2007, he is looking for a  PLP scandal!

Mr Ingraham sees whats coming on May 7th and he is fully aware that the only way to stop the gold wall from falling on him is to get the gold wall to fall in on itself!

The only thing left for Mr Ingraham to do, is to do what he is doing now, play the perception game. That’s all he has now! As the political mortician preps for the burial of the FNM government, Mr Ingraham is acting like he has a stack deck and the wind is at his back when he knows he has nothing!

His base is unenthusiastic and lethargic as they sense defeat! So out of the blue, the Guardian carries a poll that shows the FNM is holding a national lead. The problem though is, both major parties are fully aware that that poll was a poll that has little meaning because the political system in the Bahamas is geared toward the party that wins the most seats, win the government! The Bahamas is not a republic!

Had the Guardian and the polling company went into a few constituencies and asked their respondents to pick from the list of candidates offering in their constituency, those results would have painted a more credible picture of the state of the electorate! But a generic national poll tells you very little about who will win in a Parliamentary style democracy!

I know this. Ingraham knows this. The PLP knows this, but the FNM foot soldiers don’t. That is why on cue, at the next FNM rally, Mr Ingraham quoted the results of that poll to his followers, trying his best to inject some energy into his base!

Now he takes it further by walking through Chrisite’s constituency, trying to give the impression that his candidate who lost by a margin of 2-1 last time, has a chance this lap. If he is that confident of victory and if the FNM support nationally is so strong, then why did he shuffle five of his Cabinet Ministers into new or former constituencies? Why did he make such drastic cuts to the boundaries? Those aren’t signs of a confident, incumbent party!

Mr Ingraham is bluffing straight through! His brand new bag isn’t new and was never new! Hell, he never even had a bag, he just wanted you to think he does. Just look at how his party is currently campaigning; for the most part, they are not even talking about their record of this current term. Their rhetoric is all about what they will do and how corrupt the PLP is! That’s essentially their message.

What will be interesting to watch is how many votes the DNA will tally. The DNA is made up mostly of disgruntled FNMs and we maybe watching history repeat itself right before our eyes as Branvile may do to Ingraham what Ingrham did to Sir Lynden leading up to the 1992 election. Both men crossed the isle and secured a modicum of support from their former party, which in turn benefited the opposition.

The end is near! Like the captain of the Titanic, Mr Ingraham has on his brave and confident face to his supporters, knowing full well that the ship is going down! With this in mind, Mr Ingraham has quietly put his people in key positions in the party and has tried his best to sure up support to his “chosen puppets” running for political office so that when this gold tsunami passes, he will be in position to influence the next captain of the FNM.

So what will the PLP do? They must realize that victory on May 7th is theirs for the taking! Will they show up or will they get complacent and stay home, only to hand the FNM another victory again?