Nassau, Bahamas – Prime Minister of The Bahamas, the Rt Hon Perry G. Christie and a high level ministerial delegation are in Haiti attending the Twenty-Fourth Inter-Sessional Meetings of the Committee of Heads of Government of the Caribbean Community (CARICOM) in Port-Au-Prince until the 19th of February 2013.

Mr. Clifford Scavella, Director of the National Intelligence Agency, Foreign Affairs Officers and ministry aides are also on the trip.

According to a press release provided by Bahamas Information Services, high on the agenda is regional security and according to Minister Nottage, the Community is seeking to formulate a regional strategy to combat transnational crimes such as trafficking of firearms, illegal narcotics and humans in addition to human smuggling. 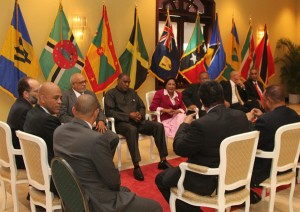 “CARICOM is concerned about National Security and law enforcement issues and their development of corporate strategies between its members in their approaches to various National Security issues” said Minister Nottage.

Dr. Nottage confirmed that the Attorney General of the United States, Mr. Eric Holder, has been invited by CARICOM to address Member States on regional national security issues on Monday, the 18th. Additionally, the Minister said that “those of us who are National Security Ministers expect to have a discussion with him on matters related to (the) United States and national security (as it relates to) CARICOM countries.”