Letter writer suggests Andre Rollins has hit something that resonates with Bahamians and confirms he is not empty and shallow like Branville McCartney! 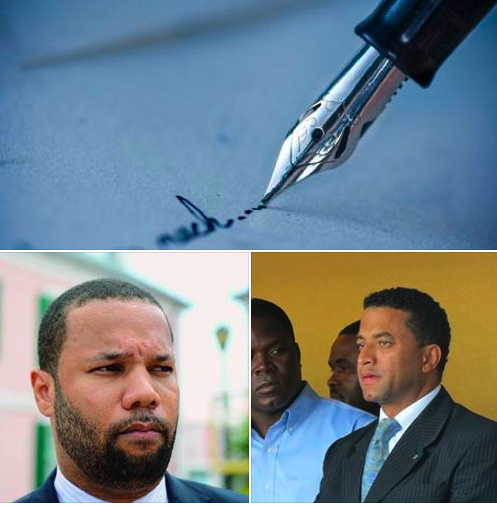 Let me take this time to express my profound disappointment in you. You are one of the few individuals in parliament and public life in the Bahamas who has the right combination of talent, passion, charisma and intelligence to one day do great things for and on behalf of the Bahamas.

Unlike like Branville McCartney, your frustration with the status quo is sincere, real and not fabricated. Branville has shown himself to be politically shallow, does whatever is politically convenient at the time and expects you to like him simply because he isn’t Perry Christe or Hubert Ingraham. I think most people have seen Branville for what he is, an empty drum with a pretty face. You, on the other hand, have potential.

There are a few things you and Branville have in common. Both of you lack the skill and wisdom to maneuver within a party system to affect change and neither of you have the discipline and patience needed to stay the course.

Mr Rollins, many people feel your frustration, but the reality is the political system in this country has always operated with a level of dysfunction, corruption and no foresight going back to the days of the UBP. This institutional dysfunction, as I call it, is a very serious thing and upsetting the established order of things is a task only few in the history of mankind have achieved.

This is your cross Mr Rollins; how to change that which many has accepted as the norm. The political masses are satisfied with the current state; only giving lip service to a better future but never taking strides to affect that future.

Men like you see the potential of this country, its calling out to you, and as you mingle with the powers that be, you are left sickened by those who have become fat with mediocrity, only changing when pressure is applied by outside forces whose intentions only serve themselves and not the Bahamas.

You can’t change what has been ingrained in the political culture overnight. There is a degree of planning, courage and skill that must be employed. You must also bear in mind that the repercussions must be thought through and preparations for them made.

You have been bitch slapped by the realities of governing and inter-party politics. Your voice is one among many. Your influence is little to non existent. You are now learning that governing requires a total view and not such a narrow scope. Your seeing the real meaning of priorities, many things to do, but all cant get the attention they deserve. For someone who wants to make a difference, this has to be very frustrating.

At this stage of Mr Christe’s political career, the time for him to do what you are aspiring to do has long gone. He still has fire in his belly, but what feeds his fire is different from what feeds yours. In other words, your fight is not his fight and you must realize this and adapt for the time being.

I believe the source of your frustration is in the fact that you have failed to recalibrate. Your stubbornness and lack of disrespect will lead you to an early political grave and if you say you don’t care, then you are not fit to lead as your vision for this country will not be realized if you are an outcast.

What you should be doing at this stage is learning. Learn how to maneuver and along the way and effect change where you can. At every stage of political promotion you learn first, adapt and then make changes. You should be seeking to find areas in Mr Christie’s fight that align with yours for the time being and make changes there.
The political grave is filled with men and women like yourself who were filled with fire and wanted change but lacked the skill to maneuver within the political sphere, patience and disciple to achieve it.

You don’t force change, Mr Rollins, you work towards it.

My advice to you is simple. Take this time to learn the system, learn your party. Make the contacts and learn not only the dysfunctions in the system, but educate yourself as to the best way to fix these problems and as you move along in your political life, you leave a trail of change.

This is what you should have been doing as the Gaming Board chairman, but your passion steered you the wrong way. Just because you didn’t get your way, you don’t through a fit and get fired, you adapt, learn the players and move more deliberately to get what you want.

The reality is you have to learn how to play the game until you are in a position to change the rules of the game while at the same time not compromising yourself or your convictions.

If you continue on this path, you will isolate yourself. The very fellow PLP parliamentarians you are berating, you will need later and the opposition parties are taking note that you refuse to be a team player. You must show some self restraint. If you learn this lesson, trust me, you can go far, but if your burning bridges now, you will have no one to call when need to pass over trouble waters.

Ten years from now I don’t want to hear you on some talk show berating the government of the day from the view of a political outcast, still in his youth, burning with passion, but too immature to work along side anyone.

Learn the lessons of these last 2 years and get better not bitter.