ON THE JURIES AMENDMENT ACT

AND THE PARLIAMENTARY ELECTIONS (AMENDMENT) BILL

I consider it an honour to be able to stand in this chamber to once again share with the Bahamian people the efforts our government is making to ensure that trials are held within a reasonable period of time because of efforts to promote efficiencies in the administration of justice.

Carnival enabled a stimulus of the local economy. I’m advised that every hotel room in Grand Bahama was occupied. Every rental car was rented. Cruise ships could not leave at their scheduled time as there were more guests off the ship than on.  Vendors did excellent business. One Vendor spent $150 and made over $5000!

Junkanoo Carnival also provided a great opportunity for Bahamians to showcaseBahamian culture, something we are exceedingly proud of. It was inspiring to see so many Bahamians attend this event. We are stronger when we are together. Grand Bahama gave an historic and exceptional launch. This government is providing ordinary Bahamians with the opportunity to participate in the economy, and in Junkanoo.   I congratulate all Grand Bahamians and the Royal Bahamas Police Force forenablingthisimpressive level of participation and for the wonderful, incident-free atmosphere that permeated  throughthis successful event.  I look forward to 7th May, 2015 when New Providence will get its opportunity to show the world even more of our culture.

Madam President, Today I rise as the daughter of Lady Zoe Maynard, the first female juror in The Bahamas, to introduce the Juries Amendment Act and the Parliamentary Elections (Amendment) Act.   Speaking in a House of Lords Debate in September, 2000 Baroness Helena Kennedy of the Shaws said “Jury tradition is not only about the right of a citizen to elect trial but also about the juror’s duty of citizenship.  It gives people an important role as stakeholders in the justice system.  Seeing the courts in action and participating in the judicial process maintains public trust and confidence in the law.”

Trial by jury, which is essentially a body of persons sworn to bring a verdict in a legal case solely on evidence submitted during the trial, finds its origins as far back as the 8th century BC in Ancient Greece.   In 399 BC the great philosopher Socrates was convicted by a 50-member jury for “denying the gods and corrupting the young through his teachings” and subsequently sentenced to death by poisoning.

Confidence in the justice system and reduction in crime is maximized when people see the justice system working.  Swift Justice is working because we have created efficiencies in the system. I will discuss how we have increased the number of courts, addressed the granting of bail for those accused of violent crime, and how we have improved the way in which jurys are impaneled. We all want a Safer Bahamas, Madame President – and a just Bahamas – and this is what we are working towards.

Madam President, as Ispeak, 10 criminal courts are sitting. Matters are proceeding in 10 criminal courts AT THE SAME TIME. Our hard working judges sit daily, ready and willing and able to hear cases. This is resulting in matters being heard within a reasonable period of time. We are moving in the right direction sending the message that in The Bahamas, matters can be heard within a reasonable period of timeon a sustained basis. This is Swift Justice, Madame President.

Let me give you the facts: 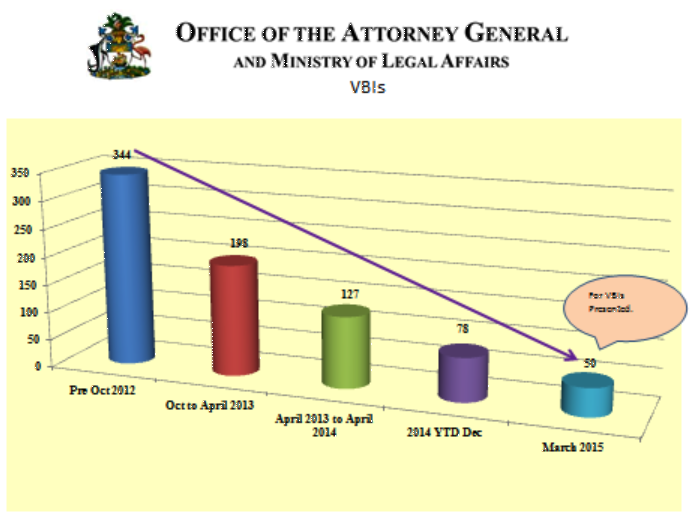 This slide shows that the days to present voluntary bills of indictment (VBIs) have decreased from 344 days in pre 2012 to 50 daysas of today 31 March 2015. Keeping statistics has enabled us to analyze ways in which we can continue to fix systemic issues. We want to further decrease this time by analyzing and eliminating challenges we face in the preparation and presentation of VBIs. 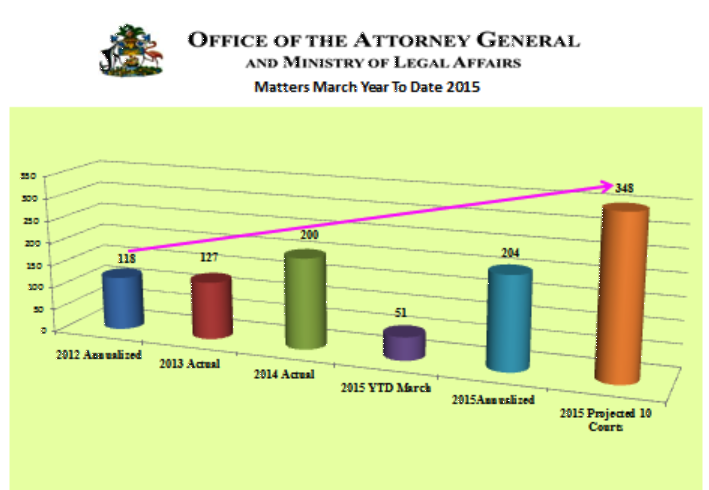 This tile shows that on an annualized basis we will try as many matters in 2015 as we did in 2014. It also shows that effectively dealing with the empanelment of juries will enhance the chances of us meeting our projected target of 348 matters disposed of in 10 criminal courts in 2015. Our data shows that in March 2015 no trial days were lost because of an inability to empanel a jury. This means that recently implemented systemic changes are working. I will shortly explain how these amendments will further enhance efficiency. 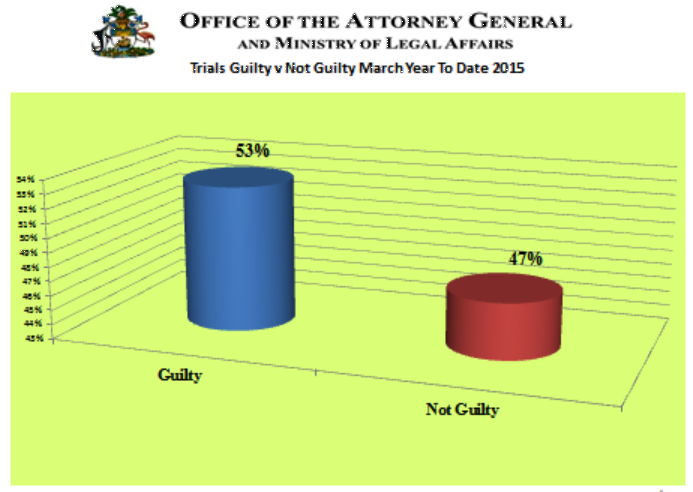 This slide shows that we continue to maintain an outcome of more guilty verdicts than not guilty YTD figures are 53% guilty and 47% not guilty. 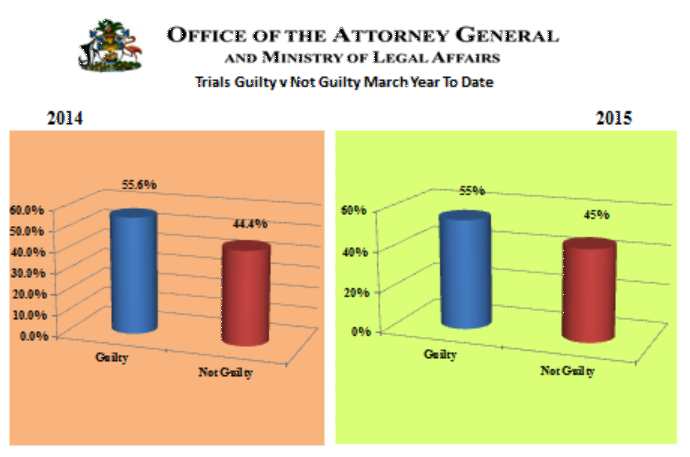 This slide shows that we continue year on year to have more than 50% guilty outcomes to trials.

The efficiencies are having a positive impact on the perception of a revolving door for bail. YTD there were 59 appearances in court in relation to bail applications by persons charged with murder or manslaughter. Of these:

We have already seen success as a result of the 2014 amendments to the Juries Act. These amendments will enable the court to notify potential jurors and select juries using modern e-business solution designed by a young Bahamian entrepreneur.

Madam President, the Registrar of the Supreme Court will be supported by a team of ten (10) jury selection administrators who have been recently employed.  These ten (10) young enthusiastic public officers will be able to contact prospective jurorsusing modern methods such as by telephone, fax and email.

The Bill enables the use of computers rather than ping pong balls and name cards [both currently used] for random jury selection.

The computer will track which jurors are currently sitting in a trial. This will enable easy deployment of available jurors to other courts as and when necessary.

We are giving more of our citizens including those from the Family Islands the opportunity to serve as jurors.  Persons will serve for a period of two (2) months.  It is expected that our new system no juror would serve more than once every three (3) years.

Madam President we have in the past used a very small pool for our random selection.  This resulted sometimes in bailiffs having tofind jurors from the streets or resort to using persons who have essentially become professional jurors.

I return to the slide projecting the number of matters to be disposed of in 2015. In March 10 courts were sitting at the same time and no days were lost for reasons connected with empanelment of juries. We expect that full utilization of the e-business solution will dramatically increase the outcome of trials within a reasonable period of time.  This in turn will continue to close the “revolving door on bail”. And these efforts will restore confidence in the system and address crime.

We believe that citizens would welcome the chance to serve as a juror under these new conditions.  Serving two (2) months every three (3) years is not onerous and the wider jury selection pool will deepen the level of participation.

Efficiency in the administration of justice is everybody’s business. Right thinking peoplewant the system to work.

We are moving closer to the day when accused persons can have an early day in court; victims can bring early resolution to tragic events; and citizens feel that the revolving door on bail is closed. I thank the Swift Justice stakeholders – the Royal Bahamas Police Force, the Bahamas Corrections Service; the Public Hospitals Authority; the Department of Social Services and the Office of the Attorney General for their patriotism, hardwork and dedication on behalf of our country.

Madam President, combating crime is everybody’s business. Jury duty is a privilege and civic duty. It is also an opportunity to actively restore respect of Christian values and the Rule of Law. With the initiatives I spoke of today as part of Swift Justice, we are on our way towards a Safer Bahamas for us and for future generations.