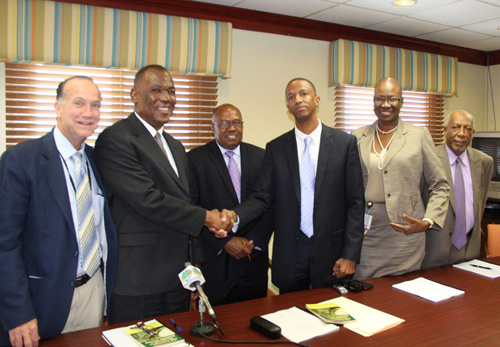 NASSAU, The Bahamas – Valentine Grimes, Chairman of the Board of Bahamasair, described the latest agreement signed between the national airline of The Bahamas and the Public Managers Union (PMU) as a “wonderful opportunity” for The Bahamas.

The five-year contract which involves some 60 workers was signed Friday, May 8, at Bahamasair Holdings Ltd. on Coral Road. Among those participating in the signing was Colin Higgs, Permanent Secretary in the Ministry of Works and Urban Development; Cornell Mortimer, director of Human Resources at Bahamasair and Keith Archer, labour consultant.

PMU president Leslie Munnings said the agreement doesn’t “cure” everything and doesn’t “fix” everything, but the PMU believes it provides a “reasonable” framework upon which both parties can build.

Among others, Mr. Munnings explained that the agreement establishes the creation of a performance appraisal system, speaks to the preservation of the dignity and standard of living for Bahamasair’s middle managers and embraces consultation and dialogue.

The President said the PMU looks forward to the opportunity to participate in the process and to give “real” input toward the establishment of “reasonable, measurable and achievable” goals for our members.

The contract also includes registration of the agreement, payment of all increases, allowances and benefits and Christmas bonuses on reduction of expenses.

“To achieve these goals we realize it must be a joint effort between airline executives and middle-managers as much of the expenses are non-discretionary,” said Munnings. “Therefore this agreement requires both airline executives and middle manages to be fiscally prudent. For that reason, we ask that if and when Christmas bonuses are being considered that what is good for the goose is good for the gander. If executives get, certainly the PMU would be seeking to ensure that middle managers get.”

Munnings emphasized that although the PMU’s goal was to secure increased benefits, it was not to kill the “golden goose” but to take a responsible approach to it.

The agreement continues to require middle-managers to participate or seek to improve the fiscal performance of the airline. “That is something that is a challenge for the airline and the union understands that and is prepared to do its utmost to work with the company to that end,” he added.

Henry Woods, Bahamasair’s Managing Director, said the airline’s management is pleased to reach a conclusion on this industrial agreement particularly seeing that it was accomplished without intervention on the part of the board of directors or the government.

“This industrial agreement reflects an understanding of maturity and cooperation on the part of the PMU because the salaries and conditions offered reflect consideration for the state of affairs in the country and by extension Bahamasair.

“I am pleased in every step of the way it was agreed that Bahamasair is ill, Bahamasair needs treatment and the consideration given by the PMU is much appreciated. We hope that going forward we would be able to continue with the spirit with which these negotiations progressed throughout the past year.”

Bahamasair’s Chairman, Valentine Grimes said the contract brings to an end the negotiations that the union and management participated in.

Mr. Grimes said both sides are “comfortable” that it is a documented agreement that they could work with. “What is important in the final analysis is that no matter how much we may disagree we find a way to agree.”

He said the Government will soon invest another substantial sum of money into Bahamasair with regard to the airline’s fleet. In approximately 30 days an announcement will be made with respect to this.

With the expectation and understanding that the agreement speaks to a performance management system, Mr. Munnings presented three books entitled How to Implement Peak Performance Management for Business Success by Abraham Butler to Mr. Grimes, Mr. Woods and Bahamasair.

“We trust that through this mutual understanding we will be able to develop a reasonable, practical and effective performance management system here at Bahamasair. The PMU is pleased to have come to this junction where we have signed off on this agreement.” He implored all members to do their utmost to help to build the airline.

The PMU has been in existence for over 10 years and represents middle-managers at the National Insurance Board, The College of The Bahamas and Bahamasair.