Lowe, one of the many workers FIRED by the FNM government from the BCB, was seen Monday evening cheering at the DNA’s Crime Town Meeting. Lowe is pictured in the photo above embracing Wayne Munroe following his lecture at the live event. Readers would remember the bloodbath and vicious axing of workers at ZNS occurred late last year. Lowe along with the brother of Dr. Hubert Minnis were the first to be terminated at ZNS. Lowe stood powerless but tearful in the yard at ZNS as she watched her co-workers axed away one by one and chopped down like a cherry tree by the FNM government.

FNMs proclaimed, “THE PARTY IS OVER AT ZNS!” While the former FNM Laura could be hear telling Jerome Sawyer as they embraced in the parking lot, “JEROME DEY FIRE ME!”

Meanwhile, DNA organizers are also hosting a series of job seminars as they seek to lure the unemployed into the Party’s tent. DNA prospective candidate for North Andros, Captain Randy Butler, owner of Sky Bahamas yesterday invited scores of unemployed persons to a Job Seminar and has the participants filling out applications for jobs all day. NOT ONE ATTENDEE WAS HIRED! We find this action by Captain Butler to be deceitful and WICKED! Why prey on the UNEMPLOYED if you know you will not hire them?

Scores filled out information cards all to be placed into the DNA information database. If ya ga use people as pawns tell them! And guess who also attended the so called “JOB SEMINAR”? you guessed it, the DNA leader himself, Branville McCartney.

Ya know, mama use to say something often; YOU SHOULD NEVER PREY ON THE WEAK and disenfranchise the poor.

Breaking News HAPPENING NOW <<< Bahamas Press is reporting a huge explosion believed to be that of a plane crash just minutes ago in Rock-away New York. A BP agent is now racing to the scene at this hour. Standby for details as EMS crews are also racing into the area… 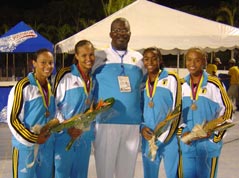 Sir Arlington Butler, the former President of The Bahamas Olympic Association, was scratched off the guest list for the opening of the new National Stadium last night. Friends close to Sir Arlington tell us his blacklisting from the opening was a testament of the hate the FNM has for one of their founding members.

The man who gave over 30 years to sports, Sir Arlington Butler, denied an invitation to the Stadium Opening…WHAT A COUNTRY!

Well What the hell is this? The people of Mangrove Cay is requesting the full autonomy from South Andros District. The Minister for Local Government was asked about the matter tonight by ZNS, and the “Preschooler” Byron Woodside response was, “I am not authorized to speak to the matter.“ Well WHAT THE DEVIL IS THIS? A minister can’t speak? Ingraham cut out dey balls and they tongue too? MUDDOS!

Obama Cancels Afghanistan War…33,000 troops recalled back to US

Breaking News HAPPENING NOW: ALL 33,000 troops now in Afghanistan will leave in a draw down beginning next month! THANK YOU JESUS YOU HAVE ANSWERED OUR PRAYERS! OBAMA acknowledges It is time to save AMERICA, The Bahamas and the world from financial destruction!

In the first incident, four (4) men spent the night in police custody after they were found in possession of a handgun while in Montel Heights.
According to police reports shortly before 4:00 pm on Tuesday 21st June, 2011 officers were on routine patrol in the Montel Heights area when they observed a Nissan vehicle occupied by the males acting suspiciously.

It is reported that one of the males on seeing the officers threw an object from the vehicle and sped off. A short while later police caught up with the vehicle, which was occupied by the men ages, 32, 24,23, and 18 years.

A search of the area where the object was thrown revealed a handgun and ammunition.

In the second incident, a 22 year old male of Fox Hill was arrested after he was found in possession of a quantity of suspected Marijuana.
Officers of the Mobile Division made the arrest sometime around 7:00 pm on Tuesday 21st June, 2011 while in the area of Fox Hill Road south.
Active police investigations into both matters continue.

Officers at Matthew Town Inagua arrested two (2) men overnight, one for shop breaking and the other for dangerous drugs.
In an operation that commenced sometime around 10:30 pm on Tuesday 21st June, 2011 and into the early hours of Wednesday 22nd June, 2011 officers on that island sent a clear message to persons known to engage in criminal activities, as well as those with intentions of breaking the law, that you will be caught and placed before the courts.

At the conclusion of the operation, officers arrested the men after recovering a quantity of stolen goods from one home, and discovering the other with a quantity of suspected marijuana. Police at Inagua encouraged the residents of that island to partner with them as “Working together we can make a safer Bahamas for all”.