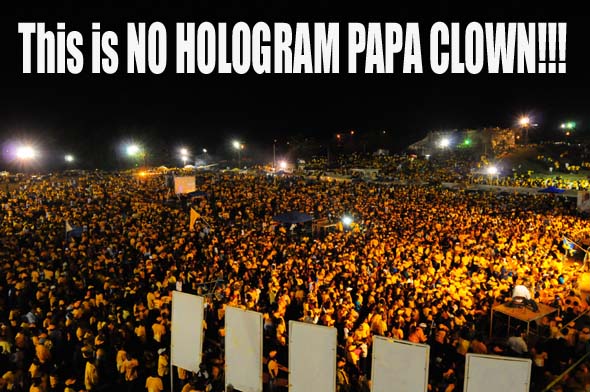 I just had to come here tonight to set the record straight on a couple of things.  I’m told that last night, right here on Clifford Park, Hubert Ingraham suggested that he was Sir Lynden’s rightful heir, not Perry Christie.  I also understand that he played a piece from the video of Sir Lynden’s farewell address to Parliament in which Sir Lynden referred to Mr. Ingraham as his “most illustrious protégé to date”.

If he raised you up and made you his heir, why were you then so mean to him?

Weren’t you the one who stood on this very park in 1992, after you’d won the election, and shouted out to the whole world “the car gone…the maid gone…the cook gone”! Wasn’t it you?  Is that how you repaid the man who you say made you his heir?

My husband and I had to hitch rides in 1992 after Ingraham came to power.  When the new Parliament met, we got to the House of Assembly in a car that Dr. Frank Walkine had kindly loaned to us.

I will never forget – and I know Sir Lynden never forgot – how mean Mr. Ingraham was to us back then when we were at our lowest point.  It was so cruel – and so unnecessary!  Mr. Ingraham had already won, so why was it necessary to be so ungracious and so unkind?  Sir Lynden was very deeply hurt by that. He really couldn’t understand it. Neither could I.

But it didn’t stop there.

You remember how they withheld Sir Lynden’s pension? The Father of the Nation, the man who had led his country to Majority Rule, the man who had lifted up poor, barefoot black Bahamians like Hubert Ingraham, had to end up fighting for his pension so he could live in dignity.  Can you imagine that?  You young people out there have to learn about these things!  O’ and in case you’re wondering, Sir Lynden died flat broke.  All those millions he was supposed to have, it was all propaganda, a complete myth.

And do you remember the Commission of Inquiry?  I saw what that did to my husband. It caused him more stress than you can ever imagine. I know. I was his wife.  I know what he went through. I was there. And I’ll tell you this too: I firmly believe that it was that stress that contributed to the illness that ended up taking Sir Lynden’s life.  I believe that with all my heart and soul. And I will believe it to my dying day. So, don’t get me started!

But what I really came here tonight to tell you is that it’s completely untrue that Sir Lynden chose Ingraham to be his heir. Nothing could be further from the truth. The fact of the matter is that Sir Lynden put Hubert out of the PLP!  He disowned him!  He cast him off!

The man Lynden Pindling picked to be his heir was Perry Gladstone Christie, and no one else. He backed Perry to be the man to lead the PLP, and no one else.  He never ever anointed Hubert to carry on his work. No, no, no!  The man he picked for that was Perry Christie.

And I’ll tell you something else too : Perry was also Sir Cecil Wallace-Whitfield’s choice to be the Leader of the FNM, not Hubert!

Finally, in trying to be gracious to Mr. Ingraham in his farewell address to Parliament, Sir Lynden did indeed refer to Mr. Ingraham as his “most illustrious protégé to date”. But the key words there were “to date”.  You see, when Sir Lynden spoke those words, Hubert had already been Prime Minister for five years. Perry at that time had not even become Leader of the PLP yet.  So it was true that at that point in time when Sir Lynden spoke, Hubert, of all his Sir Lynden’s protégés, had risen to more illustrious heights that any of his other protégés.  That’s all Sir Lynden meant.  He was certainly not indicating a preference for Hubert over Perry.  Indeed, it was exactly the opposite because as I’ve already said Sir Lynden had cast Hubert off and put him out of the PLP.  That’s how Hubert ended up in the FNM.

The record is clear : my husband was Perry Christie’s biggest backer. It was Pindling who made Perry his one and only heir to the mantle of leadership. Not Hubert nor anyone else.

So, Hubert Ingraham, don’t let me have to come back out here to deal with you again! You might not like what I have to say next time.

PLPs, in closing : I want you to get behind your Leader, my Leader, Sir Lynden’s chosen successor, his only rightful heir, the Right Honourable Perry Gladstone Christie.  Perry’s the man!

Let’s march with our Leader and on May 7th let’s all see that we vote PLP! I know that’s what Sir Lynden would want us all to do!