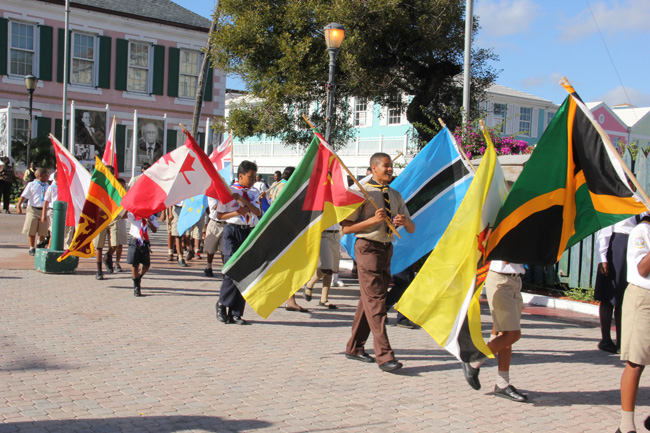 Hoisting the flag were boys and girls from the Scout Association of The Bahamas, Bahamas Girl Guides Association, and the Boys Brigade who marched from the General Post Office on East Hill Street to Rawson Square in the centre of town, where they conducted the flag raising to the theme, ‘Fly a Flag for the Commonwealth.’

Commonwealth Day is celebrated across the 53 Commonwealth countries by young people, schools, communities and civil society organizations on the second Monday in March. It is a day set aside to promote understanding on global issues, international cooperation, and the work of Commonwealthorganizations. The theme for 2015 is ‘A Young Commonwealth.’

In his introductory remarks, Rocksen Jean-Louis of the 56th Bahamas Scout Group said ‘Fly a Flag for the Commonwealth’ on Commonwealth Day is for the second year catching the imagination of thousands of participants from all walks of life, inspiring them to join with others throughout the Commonwealth.

He said, “as a collective public expression of commitment to the Commonwealth, it enables participants to show appreciation for the values the Commonwealth upholds, and the opportunities offered for friendship and cooperation with fellow Commonwealth citizens around the world.”

Nicolette Archer, Chief Commissioner of the Bahamas Girl Guides Association, read the message from Kamalesh Sharma, Commonwealth Secretary General, for ‘Fly a Flag for the Commonwealth’ on Commonwealth Day.

“Fly a Flag for the Commonwealth provides an opportunity to acknowledge publicly and collectively the continuing success of the Commonwealth in building on common traditions and upholding shared values of democracy, inclusive development, rule of law, and human rights, in order to advance opportunities for the development and growth of all, especially our youth,” said Mrs. Archer.

She noted that the success and enthusiasm with which ‘Fly a Flag for the Commonwealth’ was embraced in 2014 is evidence of its appeal as a most imaginative way for people in local communities and from all walks of life, to join in celebration with others throughout the Commonwealth.

“The awareness brought by local and national flag raising ceremonies, and the associated activities, bring greater understanding and appreciation of the values and principles of the Commonwealth Charter to which the Governments of all 53 Commonwealth countries are committed, and to which each of us as individual Commonwealth citizens can recommit ourselves on Commonwealth Day.

“Immense progress continues to be made in the Commonwealth through the goodwill, trust, and mutual respect that connect us as members of one worldwide family, united in our rich diversity. This spirit of growth and innovation is celebrated in the Commonwealth Day theme for 2015 honouring the future generation: A Young Commonwealth,” she said.

Delivering the Commonwealth affirmation, Senator Joseph Curry said, “Joining together as members of one worldwide Commonwealth Community, and valuing the personal dignity and worth of every citizen, we raise this flag as a symbol of the ties of kinship and affinity that we cherish. We draw inspiration from our diversity, and the opportunities for working together, as a rich source of wisdom and a powerful influence for good in the world.

“We affirm our commitment to upholding the values set out in the Commonwealth Charter, to serving one another in a spirit of respect and understanding, and to advancing development, democracy and cooperation locally, nationally, and internationally.”

For the first time in maritime history, the Commonwealth Flag was raised onboard all ships belonging to the fleets of the world’s leading cruise lines, P&O and Cunard Line, wherever they may have travelled in the world this morning. Service organizations in the capital cities of Commonwealth countries and Scouts in The Bahamas, Belize, Grenada, Jamaica, Malaysia, Maldives, Malta, Mauritius, New Zealand, Samoa, Sri Lanka, and Trinidad and Tobago also joined thousands of other young people around the Commonwealth to celebrate the day.

In the spirit of the Commonwealth’s working together to achieve common aspirations and goals — Ministersof Education, from52 member countries of The Commonwealth, and other invited ministers from the region, leaders of regional bodies and, stakeholders in education will assemble in The Bahamas for the 19thConference of Commonwealth Education Ministers from June 22-26, 2015 at Atlantis Resort, Paradise Island.

The triennial conference is organized jointly by the Commonwealth Secretariat and the Government of The Bahamas. Issues pertinent to education that are critical to the economic and social development of Commonwealth member states will be discussed. In addition to the ministerial meeting, several other meetings and events will take place including the Senior Officials’ Meeting, the Teachers’ Forum, the Youth Forum and the Stakeholders’ Forum.