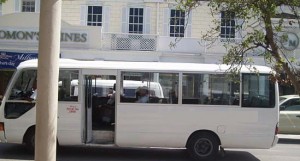 A letter to da Editor

The public bus system in New Providence is unsafe and inefficient. On a daily bases bus drivers turn the streets of the capital into a race track in a mad dash for the next $1.25; displaying a wanton disregard for public safety.  At times the music is also painfully loud and customers are held hostage by the chaos and dysfunction.  Passengers are also assaulted by the distasteful language in the music played and DVDs shown.  Unfortunately, not sufficient attention is being played to the public busing system despite its potential to ease the notorious traffic congestion on this island.

Around the world, public transportation is used to lessen the negative impact of traffic by providing a cheap and safe alternative to owning a personal vehicle.   Yet, on New Providence, buses have become rolling discos or movie theaters, which is fun for youngsters but a nightmare for other passengers.  Another baffling fact is drivers change the bus route deciding where they wish to go, leaving you stranded.  There are also routes that are saturated with buses while there is a drought in other areas.  The problem is the busing system is profit driven rather that service driven, contrary to the prime directive of public transportation. I understand that the buses are privately owned and the owners must make a profit and the drives an income, but public safety is paramount.

As a citizen, I would like the Road Traffic Department to examine the current transportation system with a view to making it safer and more efficient.   Firstly, I think music and DVDs should not be played on public buses because there is no way of striking a balance between pleasure and nuisance for the comfort of and out of respect for all.    A quiet atmosphere is also more agreeable and may also discourage people, especially young men and teenagers from hanging out on the buses.  It goes without saying that the buses should be driven is a safe manner.