Suspect has vanished off the earth since the murder of Sean Neville in February…. 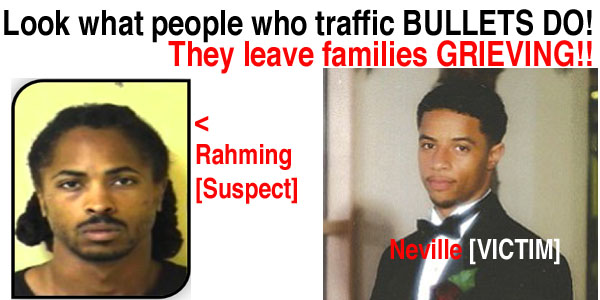 Could Rahming be in US or Canada hiding with relatives?

Nassau, Bahamas – Investigators tell us they are now on the manhunt and want you to help them find this man below in connection with the death of Sean Neville.

Detectives tell us they are seeking the public’s help in locating 33–year-old Sorvino Pacino Rahming of Edmand Street, White Grove who is wanted for questioning in connection with the murder of Sean Edmund Nathaniel Neville that occurred at Woodlawn Way on Friday 27th February, 2015.

31-year-old Neville had just exited his relative’s home on Woodland Way, Winton Heights, and was about to enter an SD vehicle when someone pulled up on him and opened fire, hitting him fatally in the upper body.

Just days before that shooting someone – with plenty darkness – had firebombed Neville’s vehicle leaving threats to kill the young decent father of one.

Rahming, since the murder, has vanished from the face of the earth leaving scores of relatives and friends of Neville in deep painful grief.

Anyone spotting this suspect should know Rahming is described as a light brown male of a medium build and about 5’ 5” – 5’ 7” in height.