Nassau, Bahamas – Our suspicions all along were true and what will take place on October 5th – this coming week – proves the DNA and the FNM will form a political alliance before the next general elections.

Hubert Ingraham proposes to table in the House on that day, a number of crime fighting bills, in an attempt to curb the violence erupting throughout the society. No information has yet leaked to the press as to what the draft bills will look like, nor has anyone in Parliament seen the drafts. But whatever the big secret is, the DNA candidate for Bain and Grants Town is already rallying support for Papa and the FNM.

Just after midnight the DNA candidate posted on the social network facebook:

“THE PRIME MINISTER IS EXPECTED TO TABLE A NUMBER OF CRIME FIGHTING BILLS TO MAKE IT DIFFICULT FOR PERSONS CHARGED WITH MURDER OBTAINING BAIL AND TO ALLOW CAPITAL PUNISHMENT TO BE ENFORCED. FAMILIES AND FRIENDS OF MURDERED 11-YEAR-OLD MARCO ARCHER WILL PARTICIPATE IN THE MARCH.”

Remember now, no member of the press nor has any opposition MPs seen any draft to the proposed crime bills, but by some surprise, Papa’s Justice of the Peace is stirring up support for the FNM.

Could Moncur be lending support to the FNM, which has plummeted lately, to show the public Hubert Ingraham is attempting to do something? These days even Blind Blake could see the FNM is set to be fired by the Bahamian people!

Ingraham’s proposals to fight crime proves to be a abysmal failure this time around, so what makes anyone believe this big tabling of a draft and marching supporters into Bay Street would change anything now? The DNA and Moncur must think the Bahamian people are fooled and here’s what we mean.

The fact of the matter is, a Parliamentary Select Committee on Crime submitted its recommendations to the Parliament over one year and seven months ago, and the Ingraham government never acted on its recommendations. Since that report was presented to the House, more than 160 residents have lost their lives at the hand of another, while the Ingraham government sat like the paralytic man at the pool of Bethesda waiting for the troubling of the water.

Readers would also remember as far back as March 2008 a Crime Symposium was held at the Prison to find solutions to the vexing crime problem plaguing the country back then. Whatever proposals were submitted, we don’t know, however, what we do know is this, the problem has gotten worse!

Another Symposium was called for the Coral Harbour community hosted by the RBPF. The event was announced in January 2011 when the murder rate was less than 5 for the year. Since that event, more homes have been broken into, more cars jacked, more women rapped, children kidnapped, more residents assaulted and the highest ever murder rate has been recorded, and the problem has gotten worse!

Again, in April of 2007, another National Crime Symposium was held at the Wyndham Nassau Resort Hotel in the Grand Ball Room. Government leaders along with church and civic partners attended the one-day event to solve the crime crisis, which back then gripped the nation like the dengue.

The Hall Report followed that event, while the dusty shelves housed the Gomez Report along with countless others with nothing ever done. GREAT PR ON PAPER! What a WASTE OF THE PUBLIC’S TIME!

So what makes Moncur and the DNA believe Papa has a plan now when he showed none while in power for 15 years? What makes them think this new cloud of smoke and mirror rapped up in some magnum condom pack will protect the Outgoing FNM from defeat? Or as we like to say, the UNHOLY VICIOUS ‘CUT YINNER KNOW WHAT’ from the Bahamain people.

What makes this whole thought of marching worse is this; the roads are all dig up across New Providence, the ones that are paved BEC now say it has to dig them up again. The traffic routes into Nassau City are few and jammed at 8AM. Blue Hill Road North is closed to traffic. Cars coming down West Bay Street snarls and meanders into the city like a sail crossing the desert, and some DNA/Papa group of supporters wants to march into Bay Street to praise the FNM’s late again crime bills? 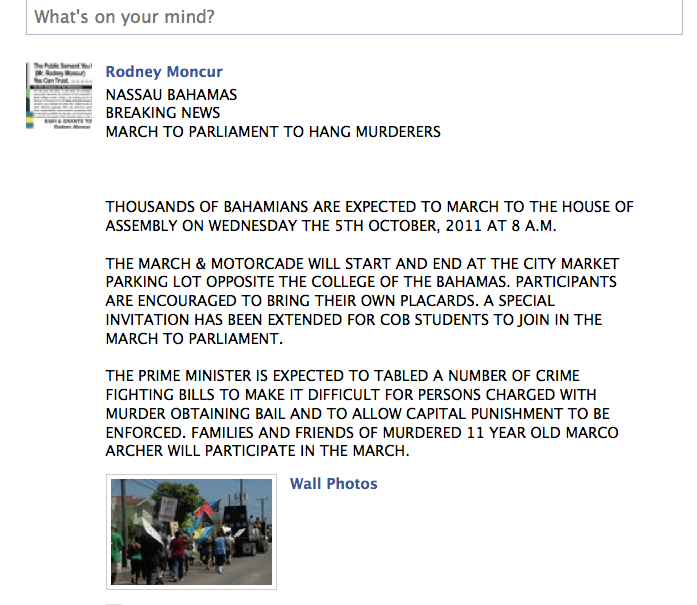