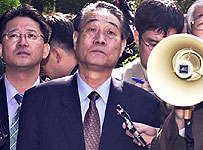 He may be set to lose his job or even the General Election – but at least Alistair Darling’s future is not quite this bleak.

A leading North Korean financial expert has been dragged before a firing squad and shot dead for ruining the country’s financial affairs.

It is understood the execution is an attempt to contain civil unrest.

Under Mr Pak’s orders, people holding old banknotes were instructed to cash them in – at a rate of 100 old notes for one new one. Further hardship was imposed with a restriction on the number of old notes that could be exchanged.

Savings were wiped out, prices soared and people went hungry, sparking anger among many North Koreans left with piles of worthless bills.

When Kim saw what 77-year-old Pak had done, he ordered the financier to be sacked from his job as chief of the communist party’s planning and finance department, then put him on trial, according to reports reaching South Korea.

After being found guilty of ruining the national economy, he was taken to a military range in the capital, Pyongyang, and shot dead by a firing squad.

Park Sang-hak, a North Korean defector in Seoul who is a key organiser of a campaign to send anti-government leaflets into the North, said a contact there told him in a recent telephone conversation that there were rumors Pak was either executed or sent to a political prison.

Despite tough restrictions, some North Koreans are able to communicate with the outside world using Chinese cell phone networks, according to defectors. South Korea’s Yonhap news agency, quoting sources familiar with events in North Korea, said Pak’s execution was seen as an attempt to placate those who had lost all their savings.

But, said the news agency, many North Koreans believe he was made a scapegoat for others involved in the revaluation, which fuelled inflation and worsened what were already serious food shortages.

‘If the report is true,’ said South Korean university professor Kim Yong Hyun, ‘it proves the regime is now desperate to placate its people. The regime appeared to have needed a scapegoat.’

He recalled the case of former agriculture ministry director Seo Gwan Hee, who was publicly executed in 1997 after being held responsible for a famine.

After Pak’s orders went out for old bank notes to be handed in, reports from the North told of rioting by hungry people, disturbances which the regime had to brutally suppress.

North Korea has reopened hundreds of markets since the botched reform, but the prices of the few goods available have continued to rise, according to Lee Seung-yong, an official of Good Friends, a Buddhist-affiliated group that sends food and other aid to the North.

Pak was last mentioned by the North’s official Korean Central News Agency in January when he accompanied Kim on an inspection trip. Kim sacked Pak following arguments within the country’s leadership over who should take responsibility for the currency fiasco, South Korean media reported last month. 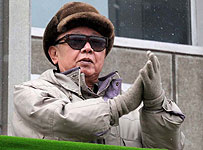 It is not unprecedented for the communist government to execute officials for policy failures.

Pak’s reported execution follows the recent firing squad death of a North Korean who had made a mobile phone call to South Korea to pass on information to a friend about the price of rice in the communist state.

While mobile phones are allowed in North Korea, the network is restricted to calls within the country. But SIM cards can be purchased on the black market allowing international calls.

The North faces chronic food shortages and has relied on outside assistance to feed much of its population since a famine believed to have killed as many as 2m people in the 1990s.

North Korea is regarded as having one of the world’s worst human rights records with public executions, camps for political prisoners and torture.