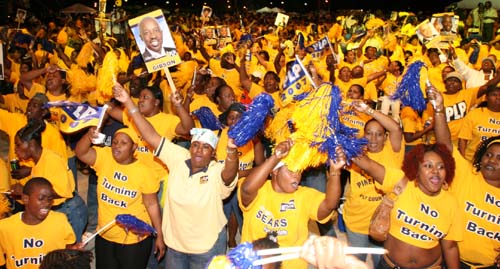 Today is the 4th anniversary since the Free National Movement grabbed power in 2007 and today, May 2 we hear from them no celebration. This is so because after four years of hardship, there is absolutely nothing for Bahamians to smile about. Ingraham left the country for the Royal Wedding while scores of Bahamians workers on Paradise Island are set to lose their jobs. Below, the PLP issued a statement yesterday:

Monday May 02, 2011 will mark the fourth anniversary of the FNM becoming the government of the Bahamas and Bahamians are measurably worst off than they were before the FNM came to office. Notwithstanding the global recession, much of the deterioration of the quality of life of Bahamians is due to the bad policies and decisions of this FNM government.

In the tourism sector, the most relevant sector, stop over arrivals are at the same level they were 26 year ago. In 1985, stopover visitors stood at 1,368,000 and today it is around that number. Under the PLP administration, stopover visitor arrivals were as high as 1,600,000 per annum. The decline under the FNM government represents over $300 million in lost tourism receipts. The effects are rippling. The Bahamas Hotel Association reported that 60% of hotels lost money last year and this is in a dismal winter season as hotel workers are reduced to 2 and 3 day work weeks and hundreds have been sent home. This winter season has been effectively lost and the Bahamas has lost its position as a premier winter destination. Bahamians can expect a further deterioration in our tourism performance in the coming months as many of our competitors in the region are boasting of gains in their respective tourism sector.

It has been 18 months since the last unemployment study was commissioned. This and the reasons given by the government for failing to conduct this survey are unacceptable and an example of bad governance as the unemployment report is used as an objective measure as to the impact on social services agencies and provides key demographic statistics that assist the government in formulating its policy decisions.

A report by The International Monetary Fund (IMF) conservatively estimated current unemployment at around 19% but the National Chairman of the FNM unwittingly, deliberately and dishonestly told the Bahamian people that unemployment remained unchanged at 14%. School closes in 8 weeks and thousands graduating students with scores more returning home will join the unemployment lines with no prospects for finding a job.

On the issue of crime, the FNM never produced a comprehensive plan on crime and we are satisfied that they have none. This and the increasing amount of violent crime demonstrate the government’s glaring incompetence in protecting the Bahamian people.

Since the FNM has been in office, some 364 Bahamians have been murdered in what has been recognized as the most violent period in recent history; many of the deaths are still unclassified. The FNM claims to have a plan for crime, but during the Prime Minister’s national address, he promised to get back to the Bahamian people on his plan for crime. This is proof positive that the issues that are most important to the Bahamian people are not the priorities of the FNM government. Further, on their watch the fear of crime has increased so much so that people are afraid to leave their homes. Whatever measures the FNM government has taken were ineffective in arresting this scourge that threatens our national security and continued economic viability.

The FNM government has been unable to stimulate the economy and the record shows that the Bahamian economy contracted by 1.7% in 2008, 4.5% in 2009 and by an estimated 1% in 2010 even though the government is yet to release the figures for 2010 on GDP growth, revenue and expenditure.

Bahamians are worse off now and much of it has to do with the policies and poor decisions made by the FNM. Four years ago, it cost $120 to license a car; that same car will cost you $375 to license today. Despite this and many other tax increases on many breadbasket items, mainly on those least able to afford it, FNM policy makers are baffled as to why government revenues have not increased. It’s simple, taxes should not be increased in a recession because it would drive an economy deeper into a recession or hold it in recession. The recent hike in gasoline and diesel prices will further negatively impact the economic recovery of the Bahamas.

The priority of the government, the road works and the associated traffic management were poorly executed, destroying local business, disrupting lives and creating unnecessary confusion, frustration and road rage.

The external reserves at the Central Bank have been propped up by the FNM government borrowing hundreds of millions in foreign currencies to stabilize the Bahamian dollar which has been under serious threat of devaluation. The PLP government calls on the government to lower the prime rate thereby reducing the cost of capital and operating costs to the government, the private sector and lowering mortgage costs to homeowners.

The series of bad decisions and poor policy and planning by the FNM is a clear indication to the Bahamian people that it is time to vote the FNM out of office when the next elections are held.