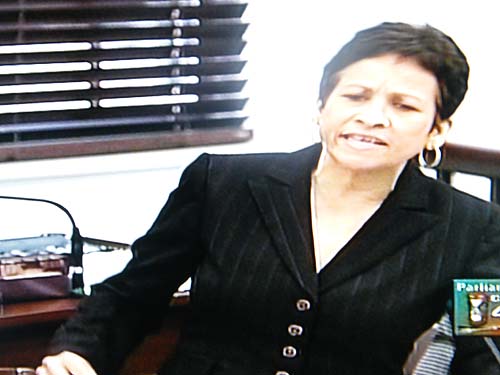 Nassau, Bahamas — Breaking news now coming into Bahamas Press that the nasty tactics of  Glenys Hanna-Martin and her ‘VICKED’ display of NASTINESS is once again now being displayed at the Convention Center on Cable Beach.

According to the Party’s website, http://www.myplp.com/party_npi.php , the NPI is, “An advisory arm of the Progressive Liberal Party (PLP) that focuses on policy matters and engages the Bahamian civil society and community stakeholders about their issues and concerns, organizes “round table” discussions throughout the year, is designed to engage the wider Bahamian community and brings young progressive Bahamians together in settings where they can speak to their future vision of The Bahamas”.

Bahamas Press is advised that the NPI is being blocked because someone has suggested that the division was not functioning, however, several branches under Hanna-Martin have not been functioning , those members will represent at the convention after BP disclosed the ‘vickedness’ afoot.

Last week Bahamas Press noted that there is a candidate, OBIE ‘SNITCH’ WILCHCOMBE, who is also convention chairman will use his bedroom bully to block potential voters of the Party. We confirmed last week that old Stalwarts and Delegates were being blocked as participants in the voting process. Since we brought this to light, HANNA-MARTIN authorized the election of several delegates. HOW COULD THE PLP BLOCK PEOPLE WHO BUILT THAT PARTY? AND THE YOUNG PEOPLE WHO ARE THE FUTURE TO THE ORGANIZATION?

Meanwhile the SNITCH can be seen walking around the convention shaking, sweating and limping. We know he scared out of his pants. WHAT COULD HE BE THINKING OF THIS TIME?

Bahamas Press is also advised that Hanna Martin’s aunt is registering persons advising them to vote for Glenys and Obie, while the Party is blocking scores of young people and old stalwart. No wonder young people found it hard to support the PLP last election. Young people and independents often decide the outcome of general election, the PLP was advised of this why are they continuing this foolishness.  These the same people who making Mr. Christie look bad behind his back and talking about they supporting him to his face .