MANGROVE CAY, ANDROS — Residents in the area of South and Central Andros must make ready as Tropical Storm Isaac approaches the island. 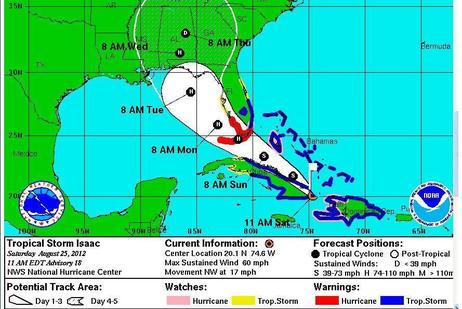 BP teams on the island are already reporting some flooding with seas having risen 15 – 20 feet in some cases.

James Pratt, Island Chief Councilor, has told our team now in South Andros that the Command Centre in the south is open. For information and updates, residents are encouraged to call into the centre for information at 369-4629.

The Command Centre is in the Southern part of Congo Town in the community.

BP can tell you the weather is already going down hill in the South with feeder wind bands and rain stretching across the entire country.

If the need arises, evacuations will take place in the South Andros and shelters we are told are already open. Here’s a list of those shelters are:
Long Bay
The Bluff
Smiths Hill
Deep Creek
Mars Bay.

We are told all centres are indeed open at this time.

NASSAU, The Bahamas – The National Emergency Management Agency, NEMA is advising residents on Andros to take have all necessary steps to ensure their safety, as Hurricane watch remains in effect for that island.

The Island of Andros, the largest in The Bahamas archipelago, is divided into three districts – North Andros, Central Andros and South Andros (Kemp’s Bay and Mangrove Cay).

Administrator for Mangrove Cay Maxine Duncombe reported heavy wind and a storm surge in the area of Burnt Rock.  The Mangrove Cay High School will be used as a shelter if the need arises.

Central Andros Administrator Cleola Pinder reported that all shelters are ready for occupancy in the event of an evacuation.

The administrators have scheduled meetings with their local disaster committees to ensure that residents are properly prepared for any potential damage the storm would cause.

Meanwhile, NEMA remains at Level II or partial ly activa ted , which means that the situation has escalated into a real threat to the islands or areas in the projected path .

During this phase, a watch is issued which means that the storm is 48 hours or two days out.  Residents are advised to take the necessary precautions – to protect themselves and their properties.

The centre of Isaac nears eastern Cuba and new watches and warnings issued for portions of Florida.

A hurricane watch is now in effect for the Island of Andros.

A hurricane watch means that hurricane conditions are expected within the watch area within 48 hours.

Tropical storm warnings remain in effect for the remaining islands of The Bahamas and The Turks and Calicos Islands.

At 11 am, the center of Tropical Storm Isaac was located near latitude 20.1 degrees north and longitude 74.6 degrees west or about 385 miles south-southeast of Nassau, 83 miles south of Matthew Town, Inagua, 246 miles south-southwest of Grand Turk in the Turks and Caicos Islands, and 198 miles south of Abraham’s Bay, Mayaguana.

Tropical Storm Isaac is moving toward the northwest near 17 miles per hour. A general northwestward motion is expected during the next 48 hours. On the forecast tract, the center of Isaac should move near or over eastern Cuba today, near or over central Cuba tonight and move near or over the Florida Keys and the Southern Florida Peninsula by Sunday night.

Maximum sustained winds are near 60 miles per hour with higher gusts.   Little change in strength is expected today. Some strengthening is forecast tonight through Monday and Isaac is expected to become a hurricane by Sunday night.

Tropical storm force winds extend outward up to 205 miles from the center.

However, this track will lessen the impact to the islands in the Northwest Bahamas which includes New Providence, Grand Bahama, Abaco, Eleuthera, Bimini and The Berry Islands.

Localized flooding can be expected in all of the islands in the warning areas.

Residents in the Turks and Caicos Islands and Southeast Bahamas should have completed preparation for the passage of Tropical Storm Isaac. Residents in the Central Bahamas should rush to completion preparations to protect outdoor properties. Elsewhere, residents should continue to closely monitor the progress of Isaac in the event of any shift in the storm’s track and intensity.

Small craft operators in the warning areas should remain in port and ensure that their vessels are safely moored.