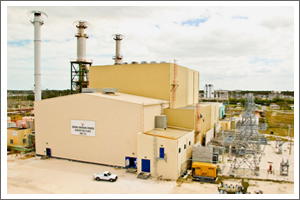 Would you please print this letter in your prestigious daily. Thank you. I am writing in regards to my power bill at Grand Bahama Power Company. As with most residents of Grand Bahama,I am a customer of GB Power. We have no alternatives here. Whatever GB Power charge me,I have to accept. It makes little difference protesting the high cost of electricity at the power company. Like most Grand Bahamians,I struggle to make ends meet. Sometimes I have to go without because of the exorbitant cost of living in Grand Bahama. It appears as if Freeport was only built for the wealthy and the middleclass. This city wasn’t designed for poor people.

Right now in Grand Bahama we desperately need a regulatory board to keep an eye on the local power company. A regulatory board could put in place a limit that GB Power could charge its customers.

The principals at the power company seems to charge you whatever comes to their mind. It is my humble opinion that they are charging Grand Bahamians arbitrarily. Just last month my power bill was just over $264. The month prior to that it was around $260. This month I was charged over $300. I can’t understand how my power bill got so high. Hardly anyone is home throughout the day to burn electricity. Moreover,only 4 persons live in my house. Yet my power bill is inching closer and closer to my mortgage payment. One of my friends who lives in a duplex apartment near Midshipman Road told me that GB Power charged him over $4000 for one month. He went to the office and protested. Thankfully,he was able to get that issue resolved. But it appears that many Grand Bahamians are not as fortunate.

I am just upset that GB Power could treat the residents of Grand Bahama in such a shoddy fashion. The principals at the power company know that many Grand Bahamians are barely surviving nowadays. They know that the economy in Grand Bahama is anemic,yet they continue to ratchet up the cost of their service. They act as if the economy in Grand Bahama is booming. I have heard several persons complain about their astronomical power bills. One gentleman told me that his power bill was over $700. He lives in a very small three bedroom house in the Hudson Estates area.

Right now in Grand Bahama the citizens are desperately in need of some relief. We need our Members of Parliament to come out of the closet and address this vexing situation. They need to speak out for us. They need to explain to Grand Bahamians why GB Power is allowed to charge its customers such exorbitant rates.

Everyone is saying that the crime situation and the recession are the two major issues that will be addressed during the political campaign season. However,I believe that the high cost of electricity will also be a major factor in the upcoming election in Grand Bahama. We have a lot of persons living without power in Grand Bahama.They simply cannot afford to keep up with the high rates at GB Power. I had seen several young men plead with the cashiers at the power company’s office on Pioneers Way to turn their power back on.

I know of a young woman from Eight Mile Rock who was living in darkness for a short time. Her bill at GB Power was around $800. Another lady in Freeport told an acquaintance of mine that she has been living without power for months. She now uses candle for light. The lady also said that she doesn’t care about turning her power back on anytime soon. She cannot afford to pay the bill. She has accepted her new way of living. Unfortunately,her story is all too common on Grand Bahama nowadays. Many persons have resigned themselves to the fact that they just cannot afford electricity in Grand Bahama anymore.Living without power is now their new way of living in the 21st century Bahamas.

These are just a small sample of Grand Bahamians who have been forced to live without electricity because of GB Power’s exorbitant power rates. It is simply heartrending that we have so many persons living among us who are no better off than the underprivileged citizens of Third World countries,yet we continue to call The Bahamas a modern country.