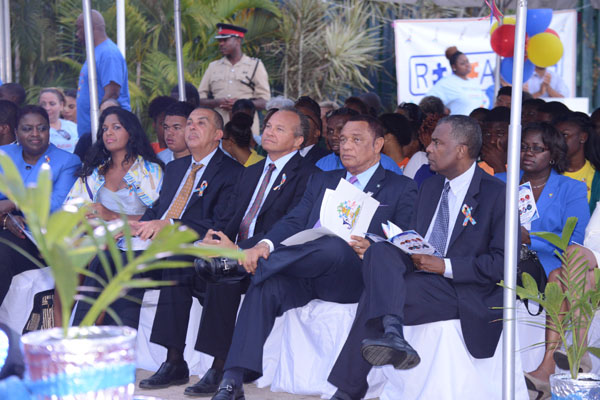 NASSAU, The Bahamas – On World Autism Awareness Day, April 2, the traditional “Light it up Blue” ceremony was held in Rawson Square in recognition of the need for support for those affected by Autism and related challenges.  Prime Minister the Rt. Hon. Perry G. Christie gave the keynote address.

Also speaking to the audience were the President of Trinidad and Tobago His Excellency Anthony Carmona and his wife, Reema Carmona who is a patron and advocate for support of persons with disabilities.

The Bahamas REACH organization – Resource and Educational Source for Autism and Other Related Challenges – the prime supporter and advocate for the autistic and their families in the community received a cheque donation from Junior Achievement.  Pictured at the Rawson Square ceremony seated in first row, from left: Minister of Social Services & Community Development the Hon. Melanie Griffin; HE Reema Carmona; President of Trinidad & Tobago HE Anthony Carmona; President of REACH Mario Carey; Prime Minister the Rt. Hon. Perry Christie; and Minister of Foreign Affairs & Immigration the Hon. Fred Mitchell.

In the second photo below, President of REACH Mario Carey, right, accepts the donation from Junior Achievement.  (BIS Photos/Peter Ramsay). 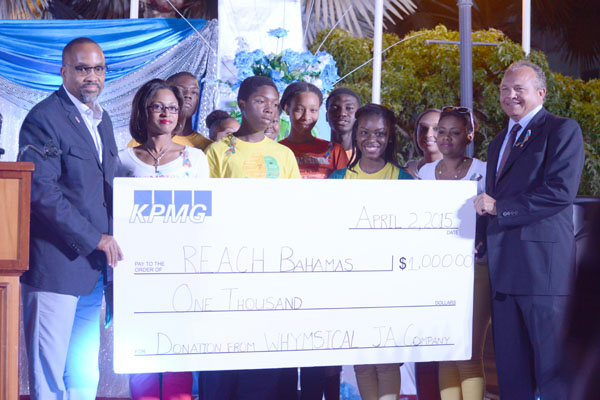