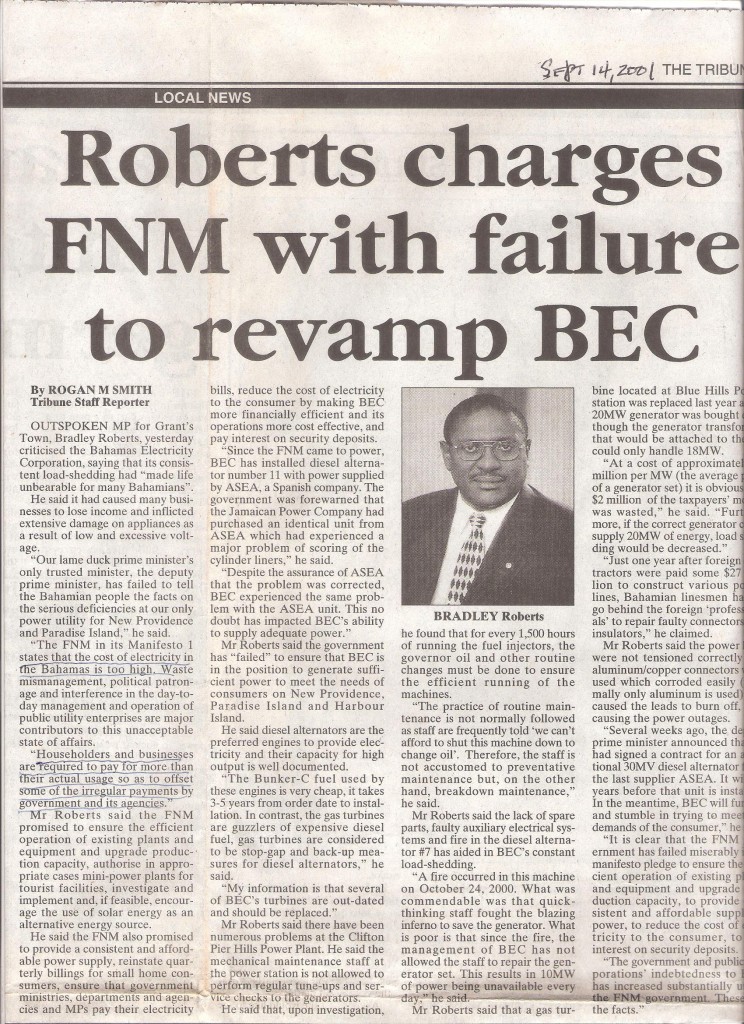 While residents in New Providence suffer from the blistering summer heat caused by BEC constant load Shedding, the FNM Government continue to play Russian roulette with the welfare of young and senior Bahamians who are vulnerable to the high summer temperatures.

It was Jr Minister Phenton Neymour who assured the Bahamians in mid-2010 that major overhaul of BEC Generators would be executed during the winter season of 2010-11 and the said maintenance only began a few days before summer officially began. Jr. Minister Neymour is now offering the excuse that the delay of the commencement of the overhauls was due to a lack of cash; this is offensive and a deplorable excuse. Thinking Bahamians expect that a caring Government would organize it priorities and would have made the necessary arrangements to insure that electricity, an essential service, was available to residents especially during the blistering summer period.

The Government and its Agencies could have easily reduced its sizable payables to BEC thereby placing the Corporation in a position to fund its maintenance program on a timely basis rather that subject the residents to potential health risk etc. Clearly the government has its priorities terribly misplaced thereby adversely affecting the welfare and well-being of its citizens.

The Progressive Liberal Party demands that the Prime Minister comes clean and tell the Bahamian People the Facts on BEC and to forthwith answer the following questions:

Will the Prime Minister explain why the maintenance on the first major generator at the Clifton Pier Station (CPPS) failed after it was recently returned to service?

Will the Prime Minister provide an explanation on the very serious problem with one of the 40 MW generators at the CPPS?

Will the Prime Minister provide full details on the maintenance program scheduled for the CPPS and the Blue Hills Power Station and in the Family Islands?

Will the Prime Minister provide full details on the estimated cost for all maintenance of Generators including the Family Islands and the schedule for same?

The PLP reminds the Prime Minister and his Government of the terrible conditions which currently exist at BEC were virtually the same that existed in 2001(see attached Tribune article dated September 14th 2001)  leading to the General Elections of 2002. The 2007 FNM manifesto promises on BEC affirms the strong state of affairs of the Corporation at that time. The conditions which existed in 2001 under the FNM have returned once again in 2011. A concerned citizen yesterday wrote: “The frequent power outages are becoming unbearable for many of us.” To that we add, “so has the governance of Hubert Ingraham and his FNM Government.