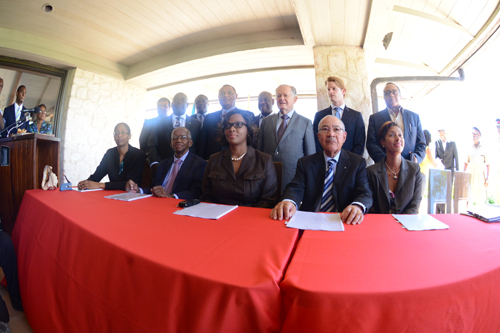 Initial buildout is expected to generate 200 construction jobs, and 300 permanent jobs for the operation of the resort. Mr. Christie said that the ‘multiplier effect’ of indirect jobs and entrepreneurial opportunities in Eleuthera will add hundreds of additional jobs in the Eleuthera economy.

Prime Minister Christie said he was happy to join the principal of Cotton Bay Holdings Dr. Luis Carlos Sarmiento Angulo and executives of Four Seasons for the official signing of the Agreement.

Dr. Sarmiento, a Columbian citizen and prominent business magnate “is a remarkable success story,” said the Prime Minister. Mr. Christie said Dr. Sarmiento through his holding company, Grupo Aval, acquired considerable fortunes from his investments in banking and other enterprises to become one of the wealthiest men in South America, and a long-time investor in Eleuthera real estate.

He noted that “South Eleuthera Airport facilities will be upgraded to international IATA standards and allow for day and night time commercial and private international flights, with re-fueling and adequate passenger and luggage facilities as well as improved local emergency services to meet the brand standards of Four Seasons and other significant touristic developments taking place in the immediate future.”

Minister of Tourism, the Hon. Obie Wilchcombe said that developments such as these would give Eleuthera the boost that it needed to spur the economy on. He said that his Ministry would be working closely with Dr. Sarmiento in order to provide the necessary assistance with promotion and marketing.

Member of Parliament for South Eleuthera, the Hon. Damien Gomez said the signing of the Heads of Agreement comprised a ‘red letter’ day for Eleuthera. He said Eleuthera has suffered tremendously over the years, therefore he was optimistic that the development would greatly assist the community of South Eleuthera by providing much-needed jobs and opportunities.