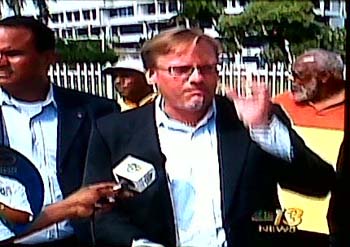 We read with astonishment and confusion the recent unemployment figures released by the Department of Statistics on Friday, August 5th, 2011. These figures are FNM “Voodoo Economics” at its best. Through the creative use of statistics one would get the misleading impression that the employment situation in The Bahamas has actually improved, with the unemployment rate having seemingly fallen from 14.2% two years ago, to 13.7% today.

We believe, after careful review of the numbers used by the Department of Statistics that the true unemployment figure is at a minimum, 17.6%.

Further, the figures do not include the alarming number of discouraged workers in our Country! Did you know that if at the time of interview, a person has not looked for a job seven days prior, he or she is considered “a discouraged worker” and therefore, not counted as unemployed? These statistics are also not reflective of the scores of phone card vendors who have recently fallen on hard times because of decisions taken by our new telecommunications master, Cable and Wireless; as well as the thousands more who have joined the unemployment line since this study, inclusive of students who would have matriculated with no prospect of employment.

By the admission of a senior official at the Department of Statistics, there are high crime areas due in large part to high unemployment in our Country that they refuse to conduct the unemployment surveys out of fear for the safety of their staff.

Taking into account the above, it is obvious that there is no matter of trust with respect to these unemployment figures – as a matter of truth, they are clearly misleading.

While we are grateful to the hard working employees of our Department of Statistics, on behalf of the unemployed of our Country, we ask that our Government cook up some jobs, not numbers.