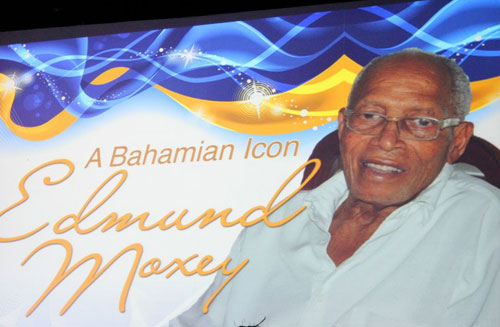 AT THE FUNERAL OF

When I heard of the passing of Edmund Spenser Moxey last Monday morning, I immediately released a statement expressing sadness over the loss of a man who had not only etched his name in glory as a frontline soldier of the Peaceful Revolution but who had also been revered for decades as an authentic cultural icon of the modern Bahamas.

In that statement I expressed to Ed’s widow, Sylvia, and to his children and wider family my personal condolences and the sympathies of the entire nation. I renew those sentiments here this morning. In doing so, I pray that Mrs. Moxey and her family will be comforted in their bereavement by the knowledge that a good man and great Bahamian has gone home to his reward after a life of service, a life of sacrifice, a life of courage, a life of love for his fellow man, and a life of impressive accomplishment that made our nation better.

I feel especially honoured and touched that Ed’s family extended an invitation to me to say a few words of tribute at this funeral service.  Although Ed’s political path diverged from mine in the mature period of our lives, there was a time, much earlier on, when we were close comrades-in-arms; kindred spirits joined in struggle for a common cause.

Indeed I have always credited Ed Moxey as one of the persons who was chiefly responsible for introducing me to politics. Back in the mid 60’s when the struggle for Majority Rule was gaining momentum among the youth of our country, a group called the National Committee for Positive Action – the NCPA – entered the fray. It was a pressure group and think-tank for the PLP but, even more than that, because of its high-octane energy and outspokenness, it opened up a new front for the war on the minority government at the time.

Ed Moxey was an important member of the NCPA, “this happy band of brothers”, as Shakespeare would have termed it, and it was this same Ed Moxey who personally introduced Lionel Carey and myself to the NCPA. He took us under his wing and took us along to the meetings. He was the person who recruited me and who sponsored me for membership in the NCPA. Thus began my political career, a career that Ed Moxey launched for me all those many years ago.

Even way back then Ed was a man of fiery passions and strong convictions. He remained that way throughout his life. He was a great fighter, courageous and unflinching in the face of aggression.

But perhaps even more consequential than that, Ed was also a dreamer, a great dreamer, especially in relation to the cultural development of The Bahamas. Looking back now, as inevitably we do on an occasion like this, we see all too clearly and perhaps a little late, that Edmund Spencer Moxey was a true visionary when it came to cultural development and community uplift.

Indeed historians will see in the ideas he espoused and the projects he introduced when he was Parliamentary Secretary more than 40 years ago that Ed was a man way ahead of his times.

For better or for ill, priorities were ordered differently back then and, frankly, Ed was something of a Lone Ranger around the proverbial table of national decision-making. Culture was for many a dispensable sideline to national development. It was not a big thing. But for Ed it was the heart and soul of the Bahamian people. He was absolutely convinced that it was the key to the re-building of broken communities and broken lives. And he was equally convinced that it was only through cultural development that we could spiritually re-connect with our African roots, something that he saw as essential to the emerging sense of national identity and our own individual appreciation of who and what we are.

And so, long before Urban Renewal came along, Ed Moxey was out there beating the drum – sometimes quite literally beating the drum – for community development and uplift through the medium of culture, backed up by the robust intervention of the state to remediate poverty and sub-standard living conditions in the inner city. That was Ed’s vision; that is what he wanted; that is what he fought for. He was indeed a man ahead of his times.

The man we pay tribute to today, Edmund Moxey, was, however, a man of many parts. He straddled many worlds and had many passions and pursuits. He was a politician who served in Parliament for ten years; he was, as I have just noted, a cultural warrior who believed in things Bahamian; he was a musician extraordinaire; he was a telecommunications technician; he was a businessman; and he was a community activist.

But above all, Ed loved people and strove always to serve them to the best of his ability and with complete sincerity of purpose. He made friends and acquaintances easily all across the social spectrum. He enjoyed the camaraderie and social bonding that came through chatting, arguing, bantering or sharing a good laugh.

Indeed it was from this wellspring of affection for people and his concern for the plight of the underprivileged that Ed’s passion for politics came. He wanted to be in a position to help people. This deep and sincere love of people lay at the heart of his career as a politician. He was a man of the people and for the people. Even today, several decades after he exited politics, the old people of Coconut Grove still remember Ed fondly as an attentive and caring member of parliament; as someone who went to bat for them; and as someone who stayed in close touch with them as an MP.

History will recall that Ed Moxey, at the age of 33, was among the group of 18 PLP members elected to the House of Assembly in the 1967 General Election. It was a game-changing moment in the history of The Bahamas, one that ushered in Majority Rule.

Sadly, they’re nearly all gone now, the men who strode in triumph along Bay Street, amidst the adoring crowds, to take their seats in the House of Assembly as the first black government in all of Bahamian history.  With Ed’s passing, there are now only five of the 18 left: the Hon. A.D. Hanna, Sir Arthur Foulkes, Warren Levarity, Dr. Eldwood Donaldson, and Maurice Moore. That’s the remnant from the class of ’67. All the others are gone now, and Ed is the latest to take his leave.

As an MP for one of the most depressed areas of the country, Ed lobbied tirelessly for infrastructural improvement: for the paving of roads, for the installation of street lights, for the provision and extension of running water, and for a health clinic and pre-school.  Today, the Coconut Grove Clinic on Acklins Street with a pre-school attached to it remains a memorial to Ed’s efforts.

But as fine a record as Ed had in that regard as an MP, his cultural contributions rank even higher. Having inherited his father’s musical genius, Ed brought it to full flower. He had a particular passion for indigenous music, especially Rake and Scrape. It was not surprising that he sought to infuse this and other forms of artistic expression into the Bahamian cultural scene.

Inevitably, even if painfully for some, one cannot omit to mention Ed’s signature creation, Jumbey Village – a themed village designed to give expression to the cultural heritage of the Bahamian people. It was a place where musicals and plays were staged for the benefit of the common man. Interestingly enough, much of this output was conceived, written and produced by Ed Moxey himself with the help of others.

Sadly, Jumbey Village did not stand the test of time but it continues to loom large in popular memory as a cultural mecca whose bright promise was never fully realized but whose time may yet come again as we focus more and more, as Ed himself did way back when, on how vitally important and potentially transformative, arts and culture are to our well-being and sense of identity.

Indeed, the biggest tribute we could ever pay to Ed Moxey and the pioneering work he did in this area of cultural development would be to explore in earnest the feasability of integrating the Jumbey Village concept into the Urban Renewal Programme.

That would be the finest and most useful thing we could ever do to not only celebrate but to perpetuate the cultural legacy and the community upliftment vision of Edmund Spencer Moxey.

I counted Ed Moxey a friend of long standing. His father, George “God Bless” Moxey, and my own father were close friends, fellow musicians and neighbours. But Ed and I were friends in our own right and I always had a great personal affection for him.

Indeed one of my first actions upon coming to office as Prime Minister in 2002 was to cause Ed to be able to earn a living from his musical skills by hiring him as a consultant in the Ministry of Youth Sports and Culture. And just three weeks ago, just a very short time before his death, Ed was named by my Government as one of the 41“Cultural Warriors” on the 41st occasion of the Independence of The Bahamas.

But let there be no mistake about it: these were not gifts for Ed. Instead he deserved them. He had earned them. He got them on merit.

And so I come here this morning to bid farewell to a friend, to my first sponsor in politics, to a loyal and patriotic Bahamian, to a good and decent man who contributed much to the life and times in which he lived and fought as a political and cultural warrior. I will miss him.

May His Soul Rest In Peace!