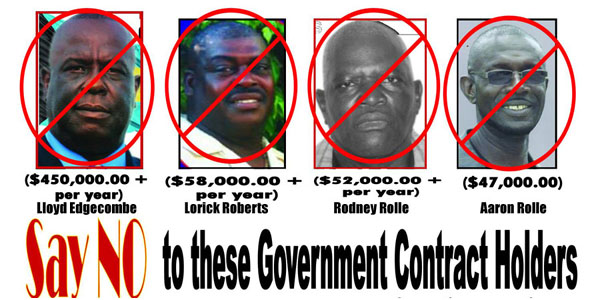 Local government elections are here and BP is concerned with the local representatives now offering themselves for office.

You would remember just days ago how we reported an incident of a fight at a local government meeting where one council member struck a blow to another. But if that was not enough, check this out.

Your Bahamas Press is keeping them honest as we reveal serious concerns in the apparent anomalies that are going on deep inside the Local Government on Bimini.

We can report these “SERIOUS CONCERNS” are indeed going on without any obvious attention being given to them by the Bahamas Government Ministry. And, since only BP has broad national / international reach, only we appear to be reporting these ‘CRIMINAL FINDINGS’ to the public.

And we can tell you that these serious, grievous concerns have been going on for a while.

And here are the facts:-

Monies are being ‘VICKEDLY’ spent for contracts that are not decided by the Council for amount to be paid. And here’s what we know: Amounts are invariably decided by one person (CHIEF COUNCILOR – Lloyd Edgecombe), where we can report, weeks after payment is made, the Council is denied information on how much public funds are being paid on specific projects.

Here’s an example: Recently you would remember how some jackass on the island fire bombed the fire station along with the truck after an officer was alleged to be sleeping with the man woman. Well, regarding the tearing down of the gutted Fire Engine Building, in documents shown to Bahamas Press, it is revealed that a sitting Council Member for Bimini (Aaron Rolle) was awarded the contract without a tender.

Well, what in the hell is dis? But there is more.

No Accountability! No Transparency! No Freedom of Information – for whatever the hell that’s supposed to mean! Member sitting on the Bimini Council cannot get the information – so what yinner think how we [JOE PUBLIC] will get it?

And it gets worse!

We can further report how our tracking of the funds earmarked show they were then partly spent on a building for a project that was advertised through a “PRIVATE Invitation to Bid”. Bahamas Press tracked down that bidding process – of which “Only One Bid Was Received”, and it went to the same Council Member on the Local Government Board (Aaron Rolle) – in what was clearly an overpriced amount of $47,000! {SEE PHOTO]. Rule would have required that there should have been a minimum of three bid received! WHAT IN DA HELL IS DIS HAPPENING IN THE GOVERNANCE OF THE BAHAMAS!

Yinner see why we need VAT?!

Stay Tuned – Bahamas Press will reveal more leading up to Local Government Elections around the country this Summer…..