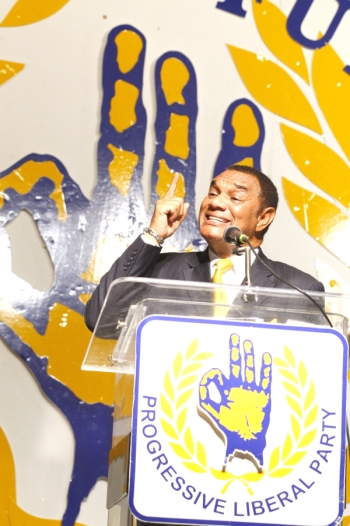 PLP PRESS STATEMENT: The Progressive Liberal Party, Her Majesty’s Loyal Opposition, joins all caring Bahamians, who like us, continue to be gravely concerned about the growing trend of naked and brazen attacks upon important State institutions and the record number of murders which are being perpetrated by lawless elements in our society. The PLP is also deeply concerned about the apparent inability and incompetence of the FNM to curtail and prevent crime.

The FNM Government continues to give criminals the message that crime pays and that they can get away with their bold antics.  The FNM Government is demonstrating, in the face of this serious crisis gripping the nation, that it is inept, paralyzed and afraid.  Without shame, the FNM Government is cowering in fear and leaving Bahamian residents and visitors to fend for themselves.

The FNM Government is also participating in the shameless attack on the State. The FNM Government continues to break the law by its failure to conduct the salary review for Judges as is required by the Judges Remuneration and Pensions Act. The Prime Minister is yet to lay before the House of Assembly for its approval the report of the Commission that is alleged to have enquired into “the adequacy of the salaries, allowances and pensions…and the adequacy of Judges’ benefits generally…”. We call upon the Attorney General to advise the Government to obey the law.

The PLP and all caring Bahamians rely on the Judgment of the Honourable Mr. Justice John Lyons who said that by failing to conduct the said review and table the said Report, the government deliberately ignored a law designed to protect the constitutional independence of our hard working Supreme Court Judges, “that body of persons whose task is to protect all persons in the Bahamas against abuses of their constitutional rights”. As Justice Lyons said, “If this was a deliberate act by the Cabinet then — and there is no dull edge to this — this must be considered a deliberate attack on the independence of the judiciary. And that, in turn, is an attack on the fundamental constitutional right enjoyed by all persons in this country”.

The PLP and all caring Bahamians rely on the words of the President of the Court of Appeal, who asked, “when you destroy the public’s faith in the independence of the judiciary, to which court do you take your case?”

The FNM Government has proven by its own actions that if it cared to conduct a salary review for Supreme Court Judges, even during these tough economic times, it could. The FNM Government has awarded a contract to the new DPP whereby the holder of that position gets cash benefits of $130,000. This contractual sum is more that is paid to every Supreme Court Justice except the Chief Justice. The PLP believes that this anomaly sends the wrong message to criminals and it must be corrected immediately. The PLP says that the Report of the Commission must be tabled for Parliament’s approval forthwith. We ask, if the Government is seen to launch “an attack on the fundamental constitutional rights enjoyed by all persons in this country”, what can innocent law abiding hard working Bahamians expect of criminals?

We call upon the Prime Minister, the Leader of this inept, paralyzed, feckless and consumed by fear FNM Government to send the right message to criminals. See to it that the criminals who attack the State institutions are speedily charged and tried. Obey the law. Pay the Judges their money, NOW!