STATEMENT FROM THE OFFICE OF THE LEADER OF THE OPPOSITION

Hon. Desmond Bannister, Minister of Works, has misled the public on the issue of the Stephen Dillet contract administration not once, but twice that I can identify. He has recklessly misrepresented his ministerial office and breached the public trust. I now challenge the Right Honourable Prime Minister to provide a full and honest explanation on what is now known as “The Stephen Dillet Scandal”.

While I will remind the public of Minister Bannister’s utterances in respect of Stephen Dillet renovations, first, I will set out verifiable facts.

On 4th November 2016, the Ministry of Education, Science and Technology (MOEST) wrote to the Ministry of Works transmitting a communication from the administration at the referenced school, “requesting, among other things, restroom facilities for staff”. The MOEST requested an investigation and advice to facilitate the requests. I was Minister at that time.

There was no further communication between the two Ministries in respect of the Stephen Dillet Primary School until 11th July 2017. Administrations had obviously changed. The MOEST sent a communication to MOW referring to the 2016 memorandum and advising that MOEST had agreed to facilitate a request from the school for the “interior reconfiguration as per the architectural drawings that were presented”. MOEST directed the MOW to “negotiate with Mr. Jack Andrews of Maljack Construction Company” for the proposed works. MOEST, by the same communication, approved contracting the following companies for consultancies:

By this time, work had already commenced. Evidence of this given by memorandum of the same date, 11th July 2017. MOEST sent another memorandum advising that the Minister of Education “visited and viewed the construction works currently underway at Stephen Dillet Primary School on Monday, 10th July 2017”. The memorandum noted the observations of the Minister and the decisions that he took to “reduce the cost of construction”.

On 13th July 2017, MOW provided the contractor with a set of architectural and mechanical and electrical drawings along with an unpriced scope of works, requesting his “keenest tender” by the following day.

Veritas (John Michael Clarke), by its letter to the MOE dated 16th July 2017, admitted to a site visit on 27th June 2017 to facilitate reviewing and measuring the conceptual drawings for the renovation of the entire interior floor area of the school.

This project did not proceed to Tender’s Board until 25th July 2017, at which time it was recommended that “due to the extreme urgency of the works” and the “nature of the renovation (extensive) coupled with the dynamic evolution in the design…it is recommended that a contingency sum of 15 per cent of base contract sum… be approved for any unforeseen works.” The grand total of the approved works was $4,566,845.10. By the photographic evidence presented, demolition works were well underway; and the Minister of Education was on tour in his red shirt. The Board noted that the project had commenced without the authority of a contract, and that the project should proceed to Cabinet for approval. It could not be verified who gave the instruction to commence works.

For the record, there is nothing inherently wrong with no bid contracts. Notwithstanding the protocols set out for the awarding of contracts under the Financial Administration and Audit Act, the exigencies attendant to an award may permit departure. While in Government, we awarded contracts without engaging the tender process for a myriad of sound reasons.

Notwithstanding, the FNM, while in opposition AND in Government (especially during the budget debate for this fiscal year), broadsided us continually on the award of contracts without public tender. The PLP is aggrieved generally by the hypocrisy of the Minister and more particularly by the fact that he has told two rank untruths.

Minister Bannister told the press that the Stephen Dillet project “started under the PLP regime. (It) started when the PLP was in power.” He said, “They obviously were working on it and we were not aware of it. We came to power and met all of this going on and we had to deal with the individuals who were involved.”

The record clearly reflects that this is an FNM project. In fact, during our term in office, Maljack disqualified itself from contractual work because of its history of incompetence and shoddy workmanship. Under the PLP administration, no contract would have been recommended to be issued to Maljack Construction given its bad record.

It is also unconscionable that the Minister of Works now blames public officers for this gaffe. Minister Bannister has publicly proclaimed: “The project did not go out to tender the way it ought to have been to tender, public to tender. The manner in which the project commenced concerned the government and the government took appropriate steps in relation to that.” He further stated, “I am not going to mention the names of public servants except to say that the government is satisfied that we have taken appropriate action in relation to those persons who are responsible.”

Further the Minister stated, “It’s a project where somebody exceeded his boundaries and the project actually [was] physically started, planned and started without ministerial authority. When that happened the minister had to act and Cabinet had to act…”

I have given you the authority from MOEST that brought the MOW into the Stephen Dillet picture. Could it be that the Minister of Works is referring to their Minister of Education? You may recall that, according to the May 23rd issue of the Tribune, Minister Lloyd announced that MOEST is “looking to establish a cohort of construction and maintenance personnel to carry out repairs and construction independent of the Ministry of Works”.

“We believe that there needs to be a cohort of individuals, professional, whether construction workers, architects, quantity surveyors, that are attached to the Ministry of Education.

“We expect that to be finalised by this week so that (Deputy Permanent Secretary Coleman) Andrews and his team can be well on the way with the scope of works that has been identified throughout the system and that work can be done and be done immediately.

“You know that I have come in to a ministry that is already a couple of weeks, if not months behind in that exercise.

“So you know, we are already playing a catch up game and that is something we can’t afford.

“This summer is the hurricane season, the rainy season, and so all the challenges that already come in the summer time, we don’t need because there is a delay in getting things done.”

Obviously, there was or is disconnect between the two FNM Ministers (Works/Education). A directive was sent to MOW after major renovation works had already commenced. I am satisfied that construction (demolition works) commenced on 1st June 2017, based on information that has come to me. We also know that the Prime Minister regularly inspected this project, so it is his administration that must answer for any irregularities here.

Given the foregoing, the PLP Parliamentary Caucus fully intends to refer this matter to the standing Public Accounts Committee for review where we expect the full cooperation of the governing side in the public interest. 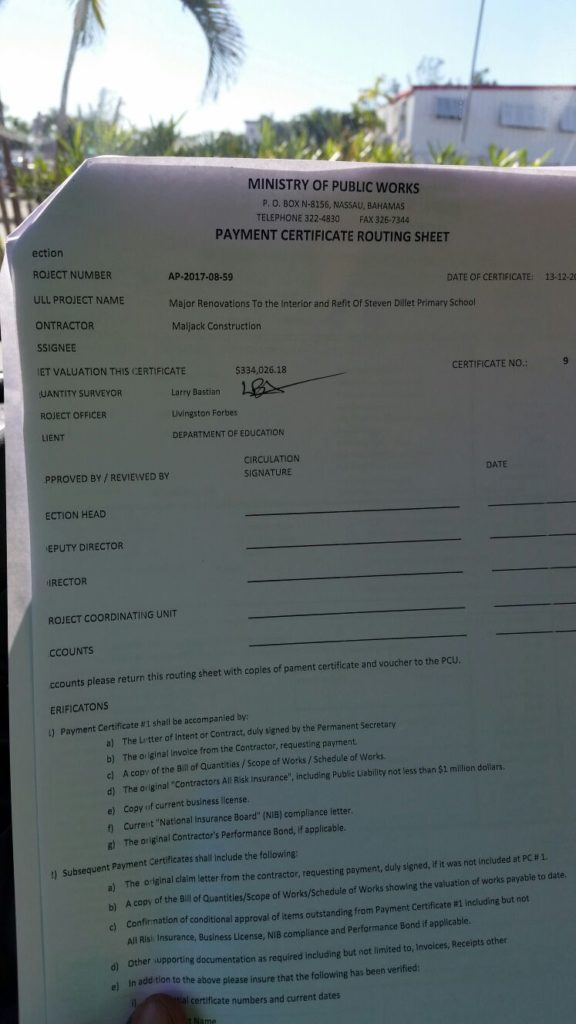 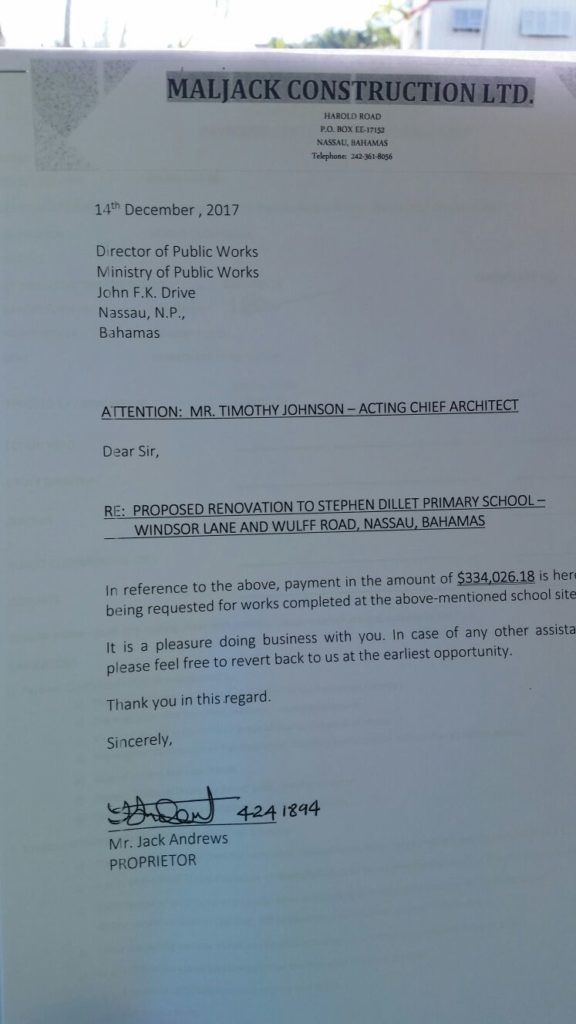 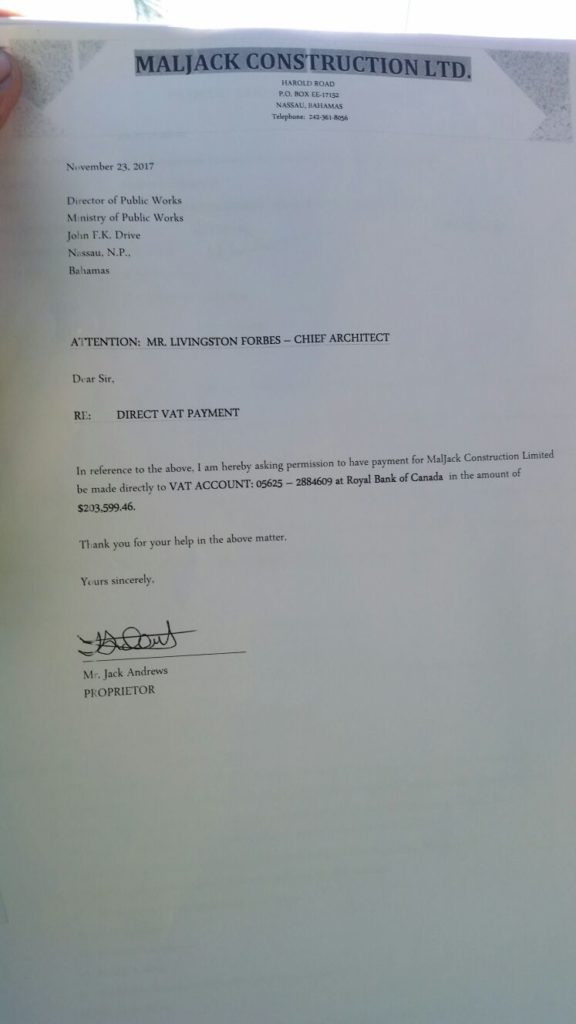 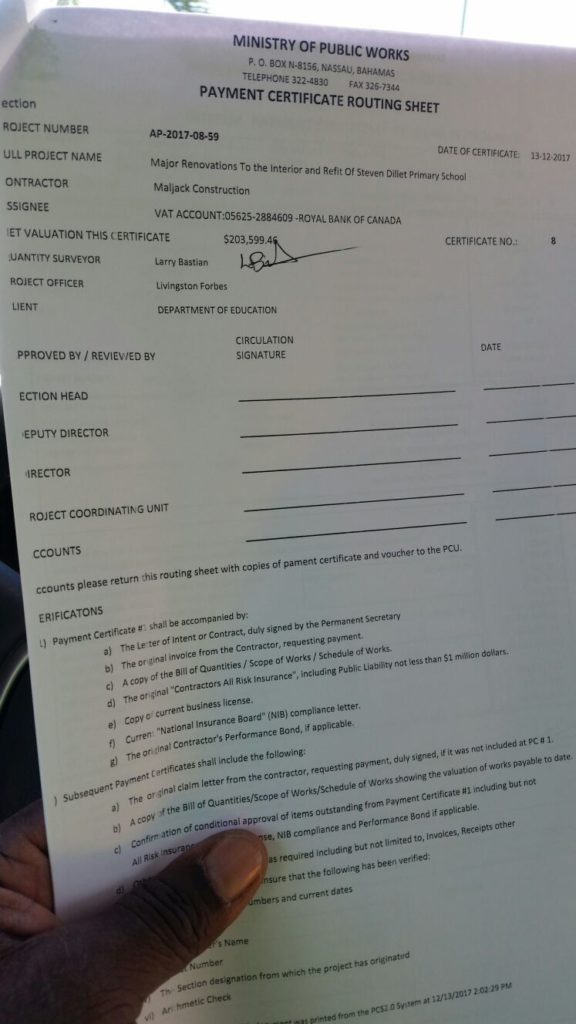