Is Dr. Minnis attempting to have JP Moncur arrested for disclosures when it is still unclear if the PM himself has disclosed all truthfully?


Nassau, Bahamas – A serious witch-hunt is now underway to attack and bring political pressure on ‘da People’s Senator’ and Justice of the Peace, Rodney Moncur, and the first strike to do this is coming from da Chief – The Prime Minister himself!

BP has learned PM Dr. Hubert Minnis has formally written Mr. Moncur seeking to have him file his disclosures after serving in the Senate or he will face serious investigations from the agencies of his Government! This bold move is unprecedented indeed!

Now this is interesting because there is still unclear if the same request was made to other former Parliamentarians who served in the last session of Parliament. Nor do we know if the current PM has made the same demands from his former Rebel Seven Members. This is yet to be discovered? Why is Mr. Moncur being targeted though in this exercise is the real question here?

June 30th was the deadline date for all disclosure for Parliamentarians, as well as from all senior government officials in the public service. All are to present filings to the Public Disclosures Commission, and failing to do so, threatening actions will be considered; like forwarding these persons for further actions to the Commissioner of Police and/or the Attorney General. The PM had delivered a such a letter to Mr. Moncur just one day before the deadline!

JP Moncur on his social media facebook page called for help following these developments as he questioned the real motives behind the PM’s letter.

“BAHAMAS NEW PRIME MINISTER DR. THE HON. HUBERT A. MINNIS HAS WARNED THE NEGRO JUSTICE OF THE PEACE RODNEY MONCUR THAT IF HE DOES NOT DISCLOSED HIS ASSETS AND LIABILITIES WITHIN 21 DAYS OF THE 9 JUNE, 2017′, THE PRIME MINISTER WILL REFER THE MATTER TO THE COMMISSIONER OF POLICE AND OR THE ATTORNEY GENERAL IN ACCORDANCE WITH THE ACT.”

And although the PM signed the letter on the 9th of June, 2017, the letter was not delivered to Mr. Moncur steps until June 29th; one day before the deadline date! UNBELIEVABLE!

Our investigations prove the request by the PM is baseless, false, fruitless, and is without merit. It raises serious questions about to the motives behind the letter; received just hours before the deadline.

Our evidence gathered on this latest political witch-hunt confirms that Mr. Moncur had indeed complete his filings from early in the year, and had the PM done his due diligence, he would have indeed discovered the same! Therefore, the delivery of such a letter to Mr. Moncur was procedurally incorrect and dishonest if you ask us! This action by the PM is indeed not consistent with persons who are in compliance of the law! And so we ask again, why Mr. Moncur?

Why Mr. Moncur was given a letter from the PM remains a mystery, and is one of serious note in our heads! This is a question we expect the Prime Minister to explain given the facts that those requested filings were complete long before the June 9th letter was written and signed by the leader of the country!

We also want the PM to answer whether he has filed all the necessary documents to the Public Disclosure Commission – TRUTHFULLY! And we wonder if he will make his declarations public through the office of the Commissioner as set out in the law!

We understand Mr. Moncur is expected to forward the matter to the Supreme Court of the Bahamas this week! 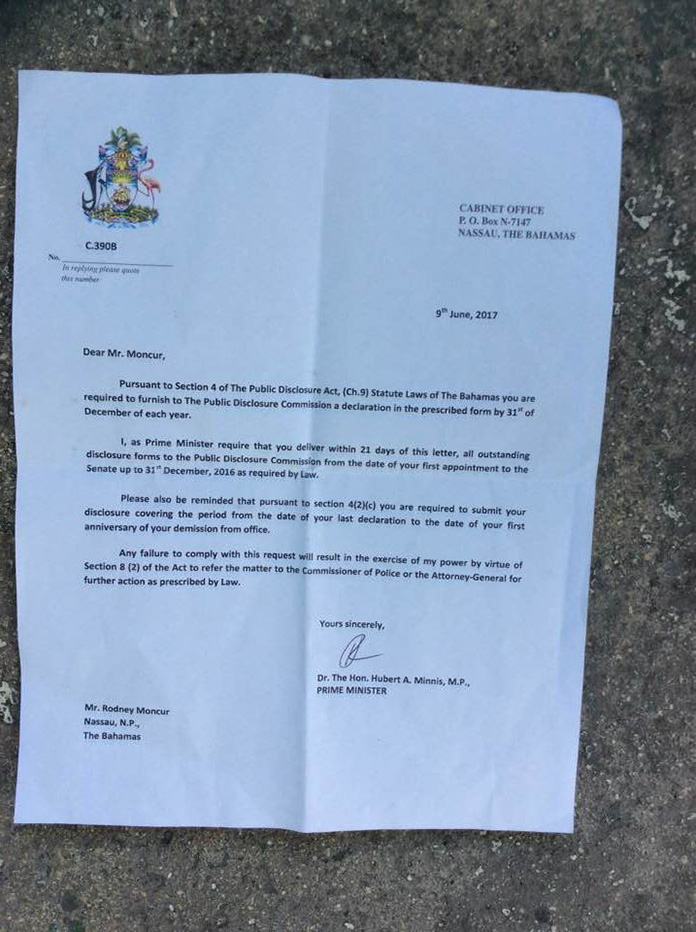