– China Construction America Has Expanded its Business Noticeably in the New York Metropolitan Area as well as Other Parts of the United States, including South Carolina, and Both the Americas and Caribbean over the Last Several Years-


NEW YORK, Dec. 26, 2017 /PRNewswire/ — China Construction America, Inc. (“CCA”) and various related business entities have been sued in New York State court for, among other wrongdoings, engaging in massive fraud, malicious acts of deceit and interference, and breaches of contract as part of a multi-year self-enrichment scheme related to the Baha Mar Resort project (the “Project”) in The Bahamas. The lawsuit, filed by the project’s original owner, BML Properties Ltd., exposes CCA’s ongoing and intentional misconduct. As a result of the court action, CCA may face over $2.25 billion in liability for misleading and defrauding BML Properties and depriving it of its investment.

According to the lawsuit, it was CCA’s larger intent and financial interest to establish this Project as a beachhead in the Americas and the Caribbean, train its unqualified workers and staff in order to obtain and then construct other projects throughout the Americas and Caribbean, and submit sham billings for hundreds of millions of dollars as the contractor and construction manager of the Project. Combined with CCA’s fraudulent and deceptive understaffing, CCA’s malicious conduct doomed the Project to failure.

As shown in the lawsuit, in stark contrast to their documented failure at Baha Mar, CCA has claimed success in the U.S. market. CCA has been the prime contractor on massive building projects in New York funded by private entities and by the state government and municipalities in New York. CCA touts “project highlights” in New York, including: New York’s City Hall, the Alexander Hamilton Bridge, the 11 Times Square Office Building, the Brookfield Place Winter Garden Glass Pavilion, and Buildings 92 & 77 at the Brooklyn Navy Yard. CCA also has undertaken public works projects in South Carolina. CCA has offices in Albany, New York, a mere three blocks from the state capitol, in order to carry out CCA’s government relations and lobbying. CCA’s “Strategic Capital” invests in New York real estate and recently announced that it is investing in a 170-unit residential tower (including 280,000 square feet of residential and retail development) planned for a lot spanning 110 Charlton St. and 537 Greenwich St, near the Manhattan entrance to the Holland Tunnel.

According to the lawsuit, “the scheme was based on CCA’s efforts to falsely create the appearance that it was working toward an on time and on budget opening in December 2014 while knowingly and fraudulently concealing its real intent not to construct the Project on time and on budget and in the process extort more money than it earned and was due. Starting in 2012, as significant ‘out of the ground’ construction began and the first floors above the foundations were being constructed, CCA knew that it would be unable to build the project on time, on budget and in accordance with the plans and specs because, among other things, it did not have and would not commit to the Project the qualified workforce or sufficiently senior managers needed to meet its representations and obligations. CCA carried out its scheme by a series of knowingly and intentionally false representations, acts of extortion, material failures to disclose, fraudulent acts of concealment, outright sabotage, and lies to the Government of the Bahamas and the Project lender.”

The court documents make clear, “CCA’s entirely undisclosed and fraudulent intent in 2012 and thereafter included a plan to delay ‘opening’ of the Project until it could negotiate its way out of the disputes it knew would arise and concerning which it believed it had material exposure…As the project moved into late 2014 and early 2015, CCA as well undertook to sabotage forward progress of the work, intentionally damage and disable life-safety, security and electrical supply systems to try to compel BML Properties and Baha Mar Ltd. to accede to its demands on sham payment applications and on fraudulent ‘commercial claims,’ stage labor walk-offs when it was already critically delayed in delivering the Project, intentionally slow-down work at the Project (a fact admitted by CCA’s executive at a meeting with the then Prime Minister of The Bahamas in April 2015), and divert equipment and executive and labor effort to its newly purchased competing project just a few miles from the front door of Baha Mar. Indeed, just 11 days before Baha Mar Ltd. was forced to file for Bankruptcy protection due to CCA’s fraud and malicious conduct, CCA and the then Government of the Bahamas signed an agreement (undisclosed until early 2017), based on what later articles deemed collusion between CCA and the Government, that ratified CCA’s movement of heavy equipment and Chinese laborers from the Project and to CCA’s newly acquired competing Hilton project while CCA was still under contract to finish Baha Mar.”

The complaint asserts, among other wrongdoings, that CCA planned to use the Project as an undisclosed, de facto “training facility” for its ambitious plans to expand throughout the Caribbean and Central and Latin America. Further, the complaint asserts that CCA’s executives and appointees to the board of Baha Mar Ltd. covered up the truth about the Project’s delays, defects, and shortcomings – with the result that the Project missed the December 2014 opening and therefore missed the Winter 2014 through Summer 2015 travel season.

The complaint also asserts that CCA and its affiliated sub-contractors used work-stoppages and slow-downs to improperly pressure BML Properties, and lied about its intent to rapidly increase the number of workers in order to finish the resort even for the delayed March 27, 2015, opening. In actuality, CCA admitted in a January 20, 2015, letter to its superiors that, despite its false claims to have adequate resources, it lacked the manpower to finish the job. The complaint asserts that CCA’s undisclosed intent throughout was to squeeze every dime out of the construction loan, regardless of its ultimate responsibilities to the Project.

The court documents go on to show that:

“CCA’s fraudulent and malicious conduct misled BML Properties into actions BML Properties thought were needed to move toward real progress on the Project, and misled BML Properties into inaction as well, later forcing BML Properties to attempt to mitigate its damage after it was, at that juncture, too late to seek other remedies such as stop work orders, ‘replacement’ of CCA (with the consent of the Project’s lender), [The Export-Import Bank of China – China Eximbank], or other extreme remedies that would have at that point delayed opening well past December 2014 and March 2015, causing the resort to miss the entire 2014-2015 travel season and incur enormous losses. BML Properties relied on CCA to be truthful regarding its last hope to open in the 2014-2105 season, namely an agreement reached in November 2014 to accelerate CCA’s work in return for an additional $54 million, which unbeknownst to BML Properties CCA never intended to perform and knew when it signed that it could not and would not perform.

“Moreover, there is evidence that a $54 million advance paid in November 2014 to CCA Bahamas was actually diverted by CCA to its own coffers to fund the purchase of the neighboring Hilton Hotel in Nassau, Bahamas. The chronology is telling: (i) CCA’s intended purchase of the Hilton was announced in October 2014; (ii) CCA Bahamas forced Baha Mar Ltd. to pay an advance of $54 million for disputed change orders (believed to be worth significantly less and to be used, CCA said, to pay for subcontractors and labor that allegedly had not been paid) by way of a special payment request submitted in November 2014 to China Eximbank, which payment CCA fraudulently extorted because CCA knew that the amounts being paid to it were unearned and undeserved and which completion date was fraudulent since CCA knew the date was unachievable because it did not have the resources to complete by that date; (iii) CCA closed on the Hilton acquisition for the reported sum of $60 million; (iv) also proving that CCA never intended to pay the $54 million to ‘subcontractors and labor that had not been paid’ and thus committing yet another act of fraud, in March 2015 CCA’s Chief Executive admitted that CCA had not used the $54 million advance to pay back-owed subcontractors and labor but rather – he said — had paid it out for ‘overtime.’ However, that in turn was a false (and concealing) statement because CCA did not employ ‘overtime’ on the Project after the advance was paid and missed the March 27, 2015, promised (but late) delivery of the Project (that such ‘overtime’ would have helped achieve).

“Manifesting its complete disregard for the rule of law and its requirements under its contracts, CCA also bought gifts, the reimbursement for which it hid from BML Properties and Baha Mar Ltd. in CCA’s expenses as part of its ‘payment applications’ sent to the Bank on the Project. CCA even resorted to stealing documents from the Project to accomplish its illicit goals and cover-up its previous reprehensible conduct.”

The complaint against CCA points out: “After China Construction America caused BML Properties’ profound loss, the Project is now operated by Chow Tai Fook Enterprises (CTFE), a Chinese company acquiring (via a secretive and suspect process) the Project from the Chinese lender, China Eximbank. China Eximbank requested that all files regarding this ‘merger’ transaction be sealed from public access by the Court with jurisdiction over the transaction. As a part of this transaction, BML Properties is informed and believes that CCA received an enormous $145 million bailout characterized as a ‘remobilization fee’ from China Eximbank even though the bulk of CCA’s equipment, materials, and workers remained in the Bahamas after 2015 for use on other projects. On December 7, 2017, CTFE publicly issued a press release in The Bahamas (apparently still in redline draft), which stated in a section intended to be deleted from the release that ‘all construction [by CCA] at Baha Mar has been performed above and beyond satisfactory levels,’ revealing that CTFE is obviously uncomfortable with CCA’s level of performance. Suffice it to say, the only ‘winner’ regarding the development of Baha Mar has been CCA, and CCA inflicted horrendous losses on BML Properties in its fraudulent scheme to become that winner.”

Pursuant to New York law, complaints are public documents. The link to the filed complaint can be accessed here. 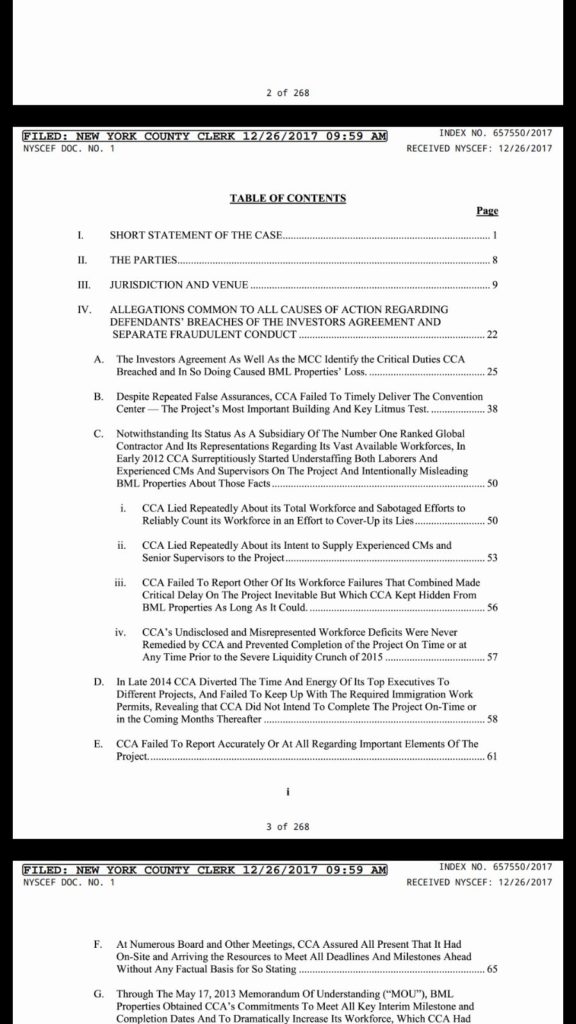 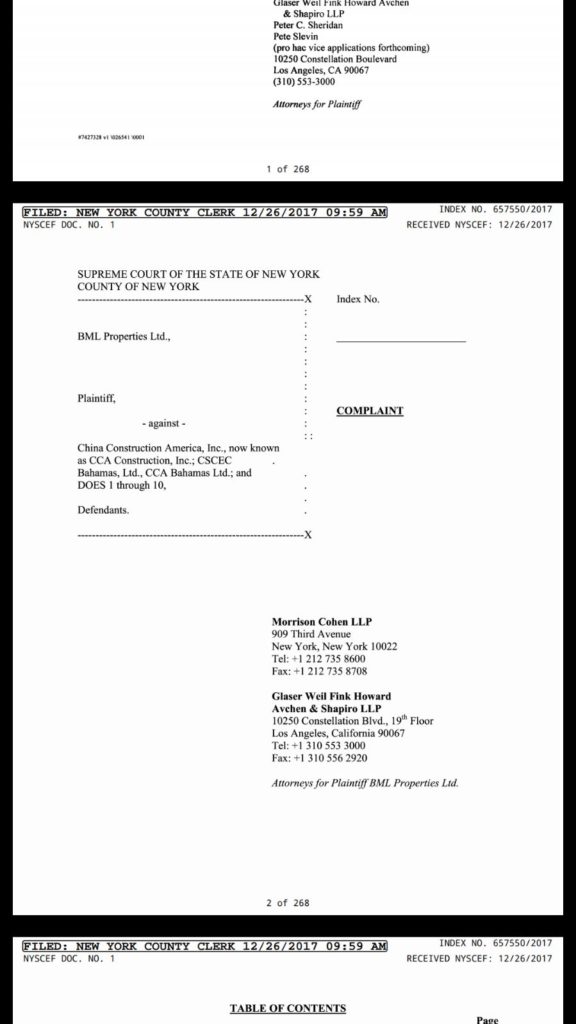 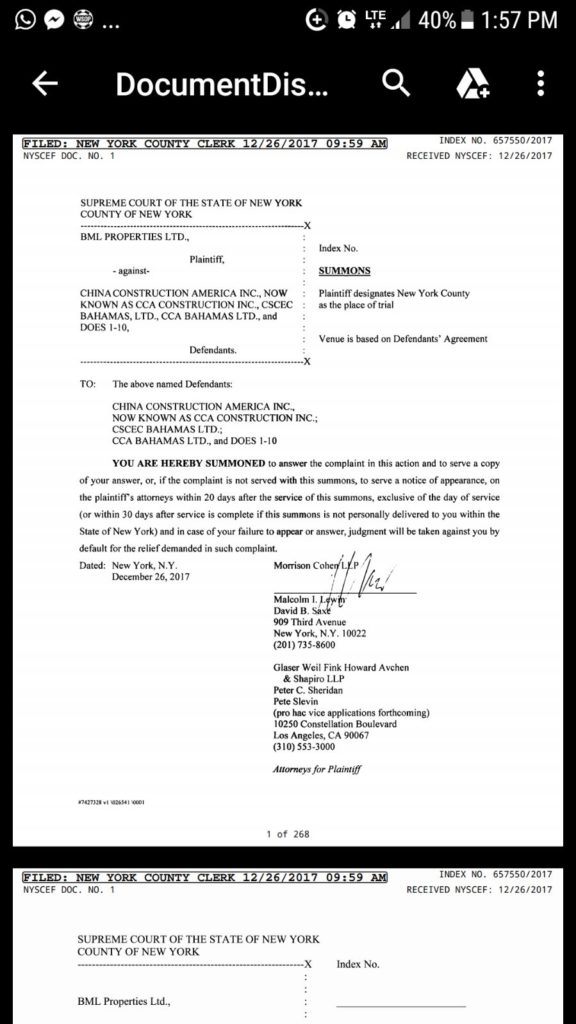