LPIA IS FAST BECOMING A PLAYGROUND FOR THIEVES AND ROGUES

Nassau, Bahamas — While LPIA has its serious, serious challenges and is fast becoming a playground for breaches in security protocols, a more serious question is emerging following the stolen bag incident at the airport. 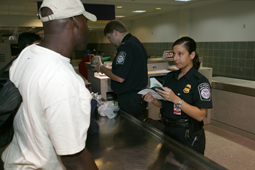 A Rogue Magistrate, who had more than 20 letters of objection at his hearing to sit on the bench, left his bag in the terminal, which was stolen by two “sticky fingers” [baggage handlers]. A government issued revolver was in the stolen bag, which was retrieved by officers at a home in the Grove. And while both men were arrested, nothing has been said about their arraignment.

The incident proves that criminals are operating BIG TIME at the international facility and, if left unchecked, something serious could soon occur at LPIA.

We also wonder whether the man carrying the weapon in his bag followed international procedures when he boarded his aircraft?

In the US and world wide including here in the Bahamas there are standards for carrying a weapon on an aircraft.

For travel in the Bahamas you must go to an airline ticket-counter check in desk and declare to the ticket counter clerk that you have a firearm you are transporting.

That weapon is to then be handed to the pilot for the safety of passengers during the flight and later returned to the licensed holder upon arrival of the plane.

Bahamas Press is wondering did the Rogue Magistrate do this? Did he board a flight in the Bahamas without reporting the weapon to officials? And, if not, why?

When are we in the Bahamas are going to understand that when we fail to follow procedures and write our own law this is when [BLANK] does happen.

Imagine that weapon being offloaded on innocent passengers in an airport facility by some jelly brain that has no regard for life.

If the rogue magistrate failed to follow this standard procedure then he is just as guilty as the thieves who stole the government property. But we know the Bahamas: “NOT A DAMN THING WOULD BE DONE, until some American is hurt.”