Nassau – This week your team BP was on Grand Bahama to see what ground ZERO of the economic fallout in the country looks like and we came across something extremely interesting. We came across Cornelius Alvin Smith.

Now, double dipping, Minnis said, is a thing that should not happen. He sold a lie that retirees will not be brought on with contracts or as consultants. He called for an end to persons being paid over $100,000 and he argued that, well, retirees should go home and make way for the youth. That sounded good hey?

But the times have changed for PM Minnis these days and the youth are being sent home as well. And, depending on who you are and what’s ya last name, the red carpet treatment is still being rolled out with some people collecting more than $100,000 a year.

Take this former Education Minister under the Hubert Ingraham Cabinet. C. A. Smith is past retirement age, isn’t he? Back in July 2018 {this year}, he presented his credentials to Juan Carlos Varela President of Panama as the non-resident Ambassador to Central America countries, including Panama, Costa Rica, El Salvador, Guatemala, Honduras and Nicaragua. We wonder what that post pays and what kind of annual budget is allotted for travels and perks? No one says. Government refuses to tell us.

And then everyone remembers how on July 8th, 2018 Smith was appointed Deputy to the Governor General of the Bahamas. An appointment followed by a Fake News report published by the Guardian [boy that was something].

But today we at BP came across something new. We came across something we never knew! BP learned the Cabinet of the Bahamas has also placed Smith into the position as a Consultant inside the passport office at the C. A. Smith Complex in Freeport, Grand Bahama. Now that must be cool. A consultant for what exactly? We all must wonder!

But get this: We don’t know what his salary in any of these positions looks like. But we know they must be juicy for a man who cried like a baby back in 2002 following his defeat at the polls. But we know this – C. A. Smith must be smiling all the way to the bank every month. And we wonder what some Bahamians have to say about this and the thoughts now swirling in PM Minnis head on this?

We have a question though: Does C. A. Smith also collect his pension as a former MP and Cabinet Minister in the Government? Watch how quiet the room will get. Ahhhh, boy – some people ain’t ga like us!

But we ga report and let yinner decide! 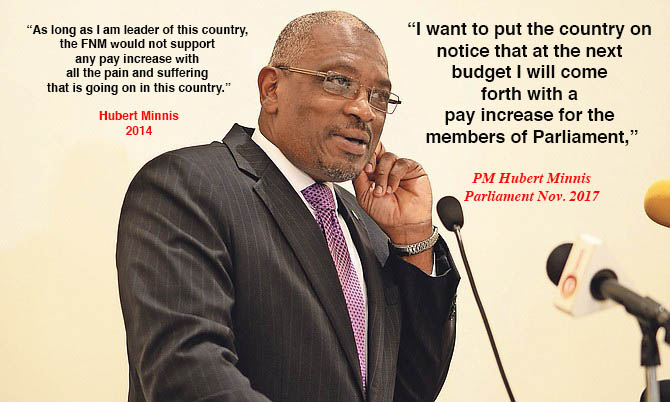