Exuma, Bahamas — Authorities are now wondering how did some 100 plus illegal Haitian Nationals ended up on board of an American vessel with a dead man onboard.

The Royal Bahamas Defence Force apprehended over one hundred (100) Haitian migrants around 8:30am this morning, in the Exuma chain.

As a search of the vessel resulted in the apprehension of numerous undocumented Haitian Nationals.

The Migrants were subsequently taken into custody and are currently being transported to Coral Harbour Base where they were handed over to Immigration Authorities for further processing. The first group of migrants arrived at 2:00pm today.

A number of the migrants were suffering from dehydration. The Defence Force’s Medical Officer pronounced one migrant dead on arrival.

A medical team from the Department of Health’s Disease Surveillance Unit headed by Dr. Julian Smith with the assistance of Nurse Earnestine Flowers was also on hand to provide assistance.

The second group of migrants are expected to arrive at Coral Harbour Base after 6pm this evening.

Bahamians must support the Christie Administration, which is doing all it can to bring great reforms to the country. 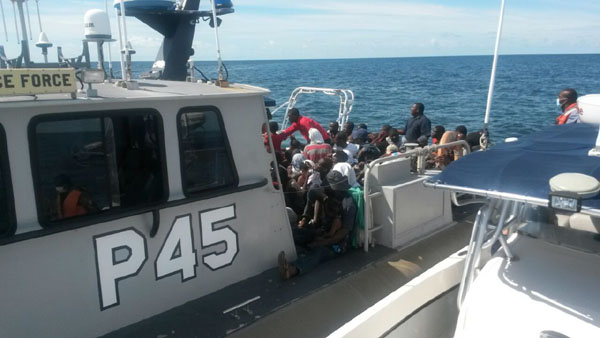