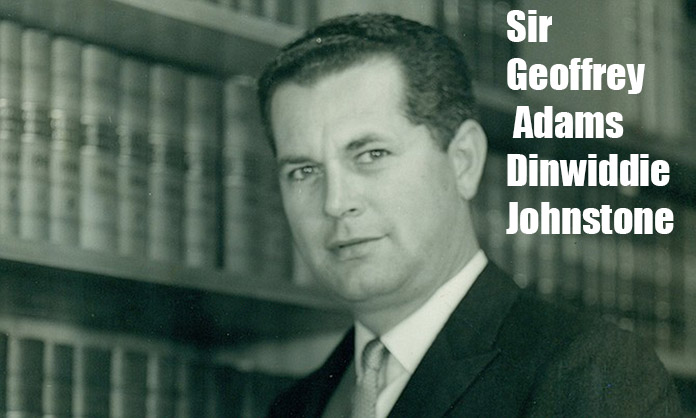 As a young reporter with The Tribune, I got to know Sir Geoffrey Johnstone very well and as someone who became a Black Power Advocate in the 1960s because of the oppressive racist policies of the United Bahamian Party (UBP), of which he was a member, he was not one of those that I considered to be a racist. In fact, in my opinion he was an extremely decent human being.

I did not reach this conclusion by happenstance, but rather by interaction with him in various settings, including a one “in-your-face” confrontation when I indeed did call him a “racist SOB.” Johnstone and Pierre Dupuch were the UBP candidates for the Far East constituency, which included Fox Hill, in the 1962 general election, and the PLP candidates for that area were Arthur Hanna and Arthur Foulkes, my journalistic mentor, who was at the time the News Editor at The Tribune.

I was not yet at the time deeply involved in the Black Power Movement, but I had been exposed to raw and repugnant racism from people like Sir Stafford Sands, Bobby Symonette, Joseph Albury, Basil Kelly and Donald D’Albenas – to name a few of the really racist members of the UBP – when I accused Johnstone of being a racist. I can well recall his response, which was, “Young man, you really don’t know me, do you?” or something close to that. He then proceeded to give me a “lecture” essentially repudiating my claim that he was a racist.

Johnstone went on to win a seat in the House of Assembly for the first time as the Junior Member for the Far East, with Arthur Hanna getting the most votes to be elected as the Senior Member. In that election, voters could vote for two candidates or under a rule known as a “plumper vote” cast both their votes for the same candidate, but the vote would be recorded as just one vote, the only difference being it helped decide who would be the Senior Member. If I remember correctly, Arthur Hanna won with more than 100 “plumper votes” and Johnstone beat Arthur Foulkes by less than 50 votes, which meant that if more than half of the PLP supporters who “plumpered” Arthur Hanna had also voted for Arthur Foulkes, both would have been elected.

I had already developed a great deal of admiration and respect for Mr. Foulkes since joining The Tribune as a trainee reporter in May of 1960, but my adulation for this remarkably unselfish human being increased tremendously as a result of the manner in which he accepted the results of the 1962 general election without any rancor or bitterness.

At the time, Mr. Foulkes was the “second-in-command,” so to speak, at The Tribune in the Editorial Department, next to Publisher and Editor Sir Etienne Dupuch, but he decided to run in the election after the late Sir Clement Maynard, who was supposed to be a candidate, backed out because of “internal reports” at the time that he became afraid of jeopardizing his job as Chief Pharmacist at the hospital.

What has to be kept in mind is that in deciding to run in the Far East, Mr. Foulkes knew full well that he was putting his job as News Editor at The Tribune “one the line,” given the fact that he was running against Sir Etienne’s son, Pierre Dupuch. In fact, shortly after the election, he resigned from The Tribune and along with other leaders of the PLP started the Bahamian Times newspaper, where I later joined him when I left The Tribune in 1965.

In the meantime, having started at The Tribune as a sports reporter, I became very much involved in the administration of the Bahamas Amateur Basketball Association (BABA) and the Bahamas Baseball Association (BBA), and at one time in the early 1960s I was President of both organizations simultaneously. One of my philosophical credos used in governing both the BABA and the BBA was that playing against stiffer competition was the best approach to improving the level of play in sports; hence, emphasis was placed on sending teams to play in the United States.

Under my presidency, BABA teams were sent to Miami on several occasions to play against high school basketball teams in the Miami area and, of course, I organized baseball trips to Wichita, Kansas, for BBA teams to compete in the highly rated annual National Baseball Congress (NBC) tournament.

Such trips, of course, are very expensive and could only have been undertaken with financial support from the public. There was never a time when he was approached for a contribution to one of our trips that Sir Geoffrey Johnstone did not respond generously because he shared the belief that sports is a good means of molding the character of young people.

After the UBP disbanded following their defeat in the historic January 10, 1967, general election, Sir Geoffrey was one of the former members of that party who sought to salve the gaping wounds inflicted on Black Bahamians by the minority white UBP government over the years when some former UBP members united with a group of disgruntled PLP House of Assembly members known as the DISSIDENT EIGHT to establish the Free National Movement (FNM) during a series of meetings held at the late Jimmy Shepherd’s Spring Hill Farms in Fox Hill in 1972.

Once again, I had the opportunity to interact with Sir Geoffrey as the founding Editor of the FNM’s newspaper, THE TORCH OF FREEDOM, which reinforced my conviction at the time – a conviction that is still “rock solid” in the aftermath of his death – that this he was not a racist and was indeed a GREAT BAHAMIAN, who did a make a worthwhile effort to build a bridge across the mistrust and animosity that historically separated Blacks and whites in The Bahamas over the years, based on my personal experiences with him.

Actually, I was hoping that the Government would have had the wisdom to send him to his final resting place with a state-recognized funeral. May his soul continue to rest in peace.