Nassau, Bahamas – Bahamas Press is reporting an incident of vandalism at an Anglican Church in the Southwest.

We understand a vagrant in the area for a second time has broken the church doors down and created damage in an attempt to draw attention.

A worshiper from the parish noted, “This is not the first time this disturbed man has broken down the church door. He has done it before and perhaps for money or attention.

The City of Nassau is fast becoming more and more violent by the day. Even the Church has difficulty worshiping in peace without being interrupted by rude violent criminals. WE CAN DO BETTER! 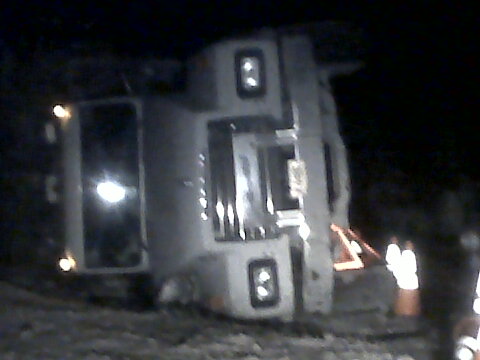 Truck Turns Over On Cowpen Road

Two (2) men are in police custody after officers of the Central Detective Unit conducted a search of their green Honda Accord and discovered a handgun and ammunition. According to police reports officers were on routine patrol on Step Street when they observed the occupants of the vehicle acting suspiciously. The men, ages 21 and 22 years, were arrested around 10:30pm on Tuesday 26th October, 2011. Active police investigations continue.

POLICE INVESTIGATES SHOOTING INCIDENT
Police are questioning a 29 year old male in connection with a recent shooting that has left a 37 year old male of Joan’s Heights West in hospital. The incident reportedly occurred shortly before 9:00 pm on Tuesday 26th October, 2011. Initial police reports indicate that the victim was sitting outside his residence at New Hope Drive, Joan’s Heights with a group of males when the occupant/s of a gold Nissan Maxima drove up and fired gunshots resulting in the victim receiving multiple gunshot injuries to the body.

FOUND BODY IDENTIFIED
As a result of on going investigations regarding the discovery of a dead body on the beach in Holmes Rock sometime around 10:00 am Monday morning ,the official identification has been completed and the name of the deceased is; Phillip Edgecombe age 53 years DOB 23/08/1958 OF Holmes Rock.

POLICE ARREST MURDER SUSPECT
Police are questioning a 24 year old male of Kelly Lane off Johnson Road in connection with the Murder at Johnson Road on Saturday 22nd October, 2011. According to police reports the suspect was arrested around 3:35 pm on Sunday 23rd October, 2011. Active police investigations continue.

POLICE INVESTIGATES DOUBLE SHOOTING
Police are investigating a shooting incident that has left two (2) males in hospital. The incident reportedly occurred around 11:30 am on Wednesday 26th October, 2011. According to police reports two (2) men were at Fowler Street off East Bay Street when they were approached by the occupants of a white BMW SUV. It is reported that one of the males exited the SUV and fired gunshots at the men which resulted in both men receiving multiple gunshot injuries to the body.

The victims were taken to hospital where they are detained in serious but stable condition. Police are investigating and are appealing to members of the public who may have any information regarding this incident to contact police.

GRAND BAHAMA POLICE MAKES FIREARM ARREST
Sometime around 5:28 am on Wednesday 26th October, 2011 police received information that three (3) males wearing dark clothing were seen jumping a fence in the area of Pioneers Loop.
Police responded and on arrival to the area observed three (3) males fitting the description given, fleeing from a residence through a nearby service road. Officers pursued the men and were successful in arresting one of the men along with a firearm and an assortment of ammunition. Additionally, items believed to have been stolen from the residence were recovered by police.

According to police reports the culprits entered the residence, by kicking in the front door, held the occupants at bay and demanded cash. Active police investigations continue.