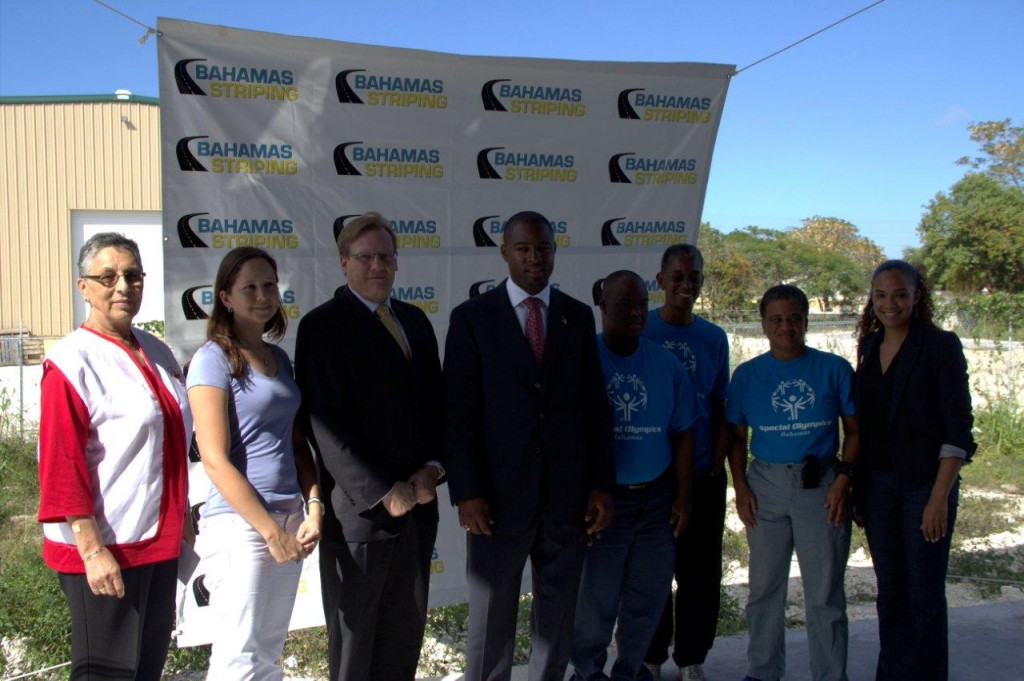 In November 2013, Bahamas Striping launched its first annual ‘The Dollar That Could Project’ which sought to raise $60,000.00 through a dollar drive campaign for one month in aid of The Bahamas Red Cross, Special Olympics Bahamas, BAARK, and The Bahamas Humane Society.

Managing Director, Allen Albury indicated that, “The Dollar That Could Project is another example of the company’s continued commitment to giving back to the community. The campaign chose charities that had the ability to reach persons over the length and breadth of The Bahamas.”

President, Mr. Atario Mitchell believes that the passion, vision, and love he has for his community and the country is all a part of the process of building a better Bahamas and providing shared economic opportunities for Bahamians.

“As business persons, we take for granted and overlook so many situations in our country. Working with these four charities was an eye opener. Working with The Bahamas Red Cross gave me the opportunity to see firsthand the level of suffering in various communities when I went out on The Meals on Wheels Program. Working with BAARK and The Bahamas Humane Society showed the extensive work they do to control the animal population as well as providing homes. The athletes at Special Olympics showed me that there is hope and after coaching a basketball game and teaching them to shoot a free throw, provided me with so much satisfaction.” he said.

Mr. Mitchell commented that although they did not meet the goal of sixty thousand dollars, the sixteen thousand dollars which will be distributed to the four charities will go a long way, and it could not have happened without the assistance and support of Abaco Markets Limited, Hi-Lite Global, Jewels by the Sea, Sammie’s Chicken, and BTC. He also challenged business persons if they had not already to adopt a charity of their choice, and donate one thousand dollars per year to help the unsung heroes of The Bahamas.

“Entrepreneurs set the example for the future and growth of the Bahamas”, said The Hon. Ryan Pinder, Minister of Financial Services.

“Being a committed member of the civic society, and having the interest of people is commendable. With Bahamas Striping’s success through hard work, they are able to give back to the community. Recognizing charities that give back nationally was an exceptional idea, and even though the goal was not met, Bahamas Striping has achieved greatness. This tangible contribution will help to further the initiatives of all of the recipient charities.” he added.

The Bahamas Red Cross was on hand to receive their donation and they expressed their gratitude as they were not able to send out all of the food parcels to persons who were waiting before Christmas because they did not have funds, this donation will be used to

Laura Kimble, Board Member for The Bahamas Humane Society said, “Money is always an issue. BHS is trying to improve and the funds will go towards building the Jill Ganza Puupy House. They can be held for 72 hours so they can be observed before they can join the rest of the population.”

She added, “BAARK the funding will go towards building kennels to assist the government with the adoption and finding homes for dogs.”

Amanda Moncur, Vice President of Special Olympics Bahamas thanked Bahamas Striping and encouraged them to not be disappointed by the small financial return, because the bigger return was the fact that they were able to come out and bond with the athletes. The funds will be able to continue all of the athletic programs.